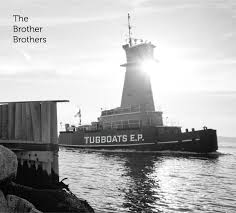 The Brother Brothers are in fact the identical Moss brother twins, Adam and David, and I should perhaps beg forgiveness from Adam and David now if I mix them up at any stage in this review.  Originally hailing from Illinois but now based in Brooklyn, NY, and with both pursing individual career paths, this six track EP represents the first coming together of this musically blessed duo. Fiddler, banjo player and vocalist Adam has played with the likes of Anais Mitchell and Ana Egge. David is a distinguished cellist and guitar picker and winner of the New Folk competition in 2011. As a musical partnership, their talents have been championed by the likes of Sarah Jarosz and, listening to this brief musical introduction to the band, it is not hard to see why.

The two voices work perfectly together and when they are at their very best there is more than a hint of early Simon & Garfunkel at play here. The opening and title track Tugboats showcases David’s talents with a bow in his hand from the off, his soulful introduction giving way to Adam’s lead vocals on what is the strongest track on the album. The musical combinations here are beautifully worked with a simplicity of approach that has resulted in a song of haunting quality.

In 1920 Cairo, Illinois, had a population of 15,000. Perfectly situated at the confluence of the Ohio and Mississippi rivers it’s bustling vibrancy has been undermined by the railroads and interstate by-passes to such an extent that the population of what is, in effect, a ghost town, is now just 2,500. With this as it’s backdrop it is perhaps unsurprising that Cairo, IL, is played and sung with a meandering mournfulness. It is another beautifully crafted track.

Columbus Stockade Blues is a lovely cover of a song that was written 90 years ago by Thomas Darby and Jimmie Tarlton. It has seen jazz, bluegrass, country and blues interpretations but here the brothers apply their own unique approach of gentle harmonies with trademark fiddles and guitar to great effect.

On a six track EP, these three aforementioned songs stand out as exceptional and, if the others do not reach the same heights, then that shouldn’t detract from the fact that this brief introduction to these talented brothers is a hugely promising piece of work that amply showcases some of the loveliest and tightest harmonies you are likely to hear this year.