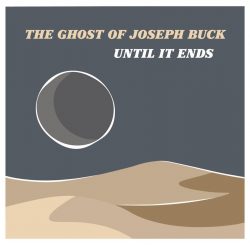 The Ghost of Joseph Buck is a new band of well-seasoned musicians. They are an off-beat five-piece based in Colorado that includes a classically trained trumpeter, a double-bass player from Austin, a drummer who doubles as an audio engineer, the pianist who writes the music for Beck, and the guitarist with whom she explores the world and life.

Denver is a corral where all the different journeys of these musicians converge, geomusically ranging from South American mariachi to midwestern ballads. Three of the tracks have Spanish titles, and over half are places names which reflects the various band members travels. Taking influence from the old spaghetti westerns, they give tribute to Ennio Morricone whose sounds can be heard apparent in the album. The sound, recorded at Mighty Fine Productions, is clear, warm and quirky, and what you’d expect from the studio who recorded DeVotchka and Czars. The songs balance the musicians well, with no instruments louder than the other, a sign of harmony within the band which shines out in the songs. It is clear that this band is a project made by true friends, only all the friends happen to be professional musicians and excellent people! The guitar is dirty but clear and never too loud; there are no pointless ego solos here. The trumpet calls out like a light in the dark over the deep harmonising vocals and double bass. The drums mark a languid cantor across the plainscape of the album nailing the colours of this album raggedly to the flagpole atop the back of a truck in the parking lot of a desert cafe.
‘Until it Ends‘ is their first album, following two EP, and while they have been kindly compared to Calexico, they have made their own record and sound by blending their many ideas.
Opening track and single ‘Observatory‘ sets the tone with vocals that are both reminiscent of 90s Nupunk and yet perfectly harmonised, with lilting melodies and unusual key changes, it sends the message to expect the unexpected. Instrumental track ‘Saguaro‘ takes it time and gets into a beautiful Southwestern groove, but leaves you wanting more trumpet, more guitar, and considering booking a ticket to Mexico. Penultimate track ‘Prison Break‘ is a pleasingly traditional outlaw story, but with twists of trumpet and guitars and vocals that hint at grunge and desert rock.
The spirit of The Ghost of Joesph Buck is one of roots and warmth and Americana UK will indeed be listening ‘Until it Ends’.