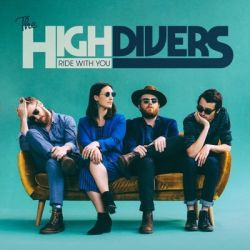 There will always be a demand for top class Americana rock’n’roll (and if that’s not a thing it should be), and South Carolina’s High Divers can fill that need nicely. They’re already two albums into their career and this is their second EP which, frankly, rocks. That’s not the most nuanced of critical judgements it’s true but it does. There are six tracks replete with harmonies, melodies and a bit of attitude and all are supremely more-ish. Often somewhat reminiscent of Tom Petty (perhaps inevitably, given the man was the gold standard), the band are tight and crisp without ever sounding slick, forced or over-produced.

The eponymous uplifting opener starts things off on a high in a tale of wanting to break free from where you are before it’s too late, while ‘Could Not Be Loved’ tones things down on an equally uplifting story of finally being loved for who you are. Then there’s ‘Still Kickin’’, which opens with a crash of chords and goes for the soft verse, loud chorus approach to good effect, ending the EP with a furious wig-out where everything is turned up to eleven. And why not? Whatever it is, The High Divers have got it and you should ride with them.