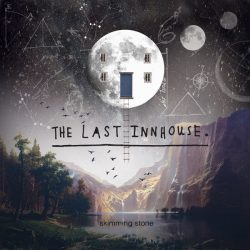 The Last InnHouse describe themselves as an alt-country/Indie/Folk outfit which is quite a mish-mash of genres and their debut album, ‘Skimming Stone’, attempts to showcase the band’s songwriting and playing strengths in each. The heart of the band consists of original members Victoria Siddoway and Craig McDearmid, and since forming in 2011 they have been writing and performing, developing their sound, culminating in this album.

There is a very structured layout to the 10 songs on the album, tracks seemingly following each of the aforementioned genres in turn. Opener ‘Love My Ghosts’ has a country feel to it, all banjo and guitar (although topped and tailed by an unnecessary childlike organ); ‘I Still See You’, is a darker more ethereal folk number; and ‘Resurrection Day’ has a bluesy, rocky feel albeit with an inexplicable sax solo in the middle.

And this is part of the problem with ‘Skimming Stone’. In an attempt to showcase all the band’s talents, there is so much crammed onto each track, it is very difficult to really enjoy the song. ‘Daydream Field’ is the next folk track, although a pedal steel makes an appearance, and guitars and overfilling drums almost drown out the vocal. ‘Deadman’s Hand’ moves along well, with a good drum rhythm and proficient guitar playing, but again too much going on. The first single release, ‘Open Road’, opens with an almost Eastern feel but somehow finds an ’80s style big rock guitar solo in the middle, and ‘Shoot Me Now’ – back to the country – has a bright rhythm guitar across a lively drum beat, but the bright guitar starts to take over by the end of the track.

And so it continues…. decent slow acoustic guitar opens ‘Ballad of Lizzie and Rossetti’, but all too soon an unnecessarily loud organ appears, spoiling the mood, inviting in more overly aggressive rhythm guitar and drum fills, ending with a long guitar solo. (Not prog rock long. But long enough.) ‘Love Scar’ is a decent track, almost radio friendly, but again would benefit from a little light stripping back on the production. The album ends with ‘We Were Gone’, the least cluttered track, an unremarkable song with an unnecessary change in drum rhythm, concluding with a spoken lyric….an attempt at folk rap, perhaps?

There are some positives on this album: Siddoway’s voice is excellent throughout, there is very a high standard of musicianship displayed in a number of areas and at least a couple of the tracks are strong. But overall the album is very cluttered, there is simply too much crammed in, too much distraction from what could be a set of outstanding songs. Which is kind of a shame.

A very cluttered album, all too busy for its own good