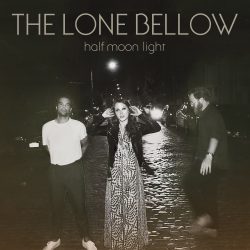 The tracks ‘Intro’, ‘Interlude’ and ‘Finale’ on The Lone Bellow’s fourth studio album are all parts of a hymn. This may seem a little strange for a band hailing from Brooklyn, New York, but The Lone Bellow have nothing but the south running through their musical veins. We hear musical snatches in the first and eighth tracks of the hymn in question (‘The Eastern Gate’, written in 1905 by Isaiah G. Martin), but it’s only on the final track that we hear the unvarnished vocals of lead singer Zach Williams’ grandmother, recorded at the funeral of her late husband. The song carries a message of hope and positivity for what’s ahead and fittingly, there is a lot of that in this album – even as it deals with uneasy themes.

‘I Can Feel You Dancing’ is the first original song we hit and it’s upbeat in spite of being a dedication to both Brian Elmquist’s and Williams’ late grandfathers (“Heat in my bones / Beat on the drum / All my money on a feeling / Just a face in the crowd / Feet off the ground,” Williams sings joyfully). ‘Wonder’, with the best opening lyrics of the album (“I’m sipping on cheap coffee listening to Graceland / Wondering if you’ll write me, wondering why my life is like / That sad old country song my family used to hum to”), opens with acapella vocals that build to sumptuous background harmonies. ‘Count On Me’ is the most folkish song on the record, and has a chorus that is rousing and gospel in tone, while ‘Wash It Clean’ presents lyrics that are matter of fact but also touching with their casual intimacy (“Time is growing shorter / You’re reaching for your keys / Half moon light over your shoulder / In the canyon that you made”).

Lead vocals are largely led by Williams, who does a stellar job showing complex emotions with every inflection, but Kanene Donehey Pipkin does take lead vocals for ‘Just Enough To Get By’ and ‘Illegal Immigrant’. Both of these songs tackle slightly darker subject matter than others: ‘Just Enough To Get By’, sung rawly by Pipkin, is about her mother, who pregnant at 19 from rape was forced to give up the baby, only to reconnect with her years later; ‘Illegal Immigrant’ on the other hand, is an admirable track that comes from the point of view of the subject in the title. While both tracks reflect on serious and difficult issues, Pipkin’s vocals give them a sincere energy that draws you in and keeps you listening.

The album was produced by friend of the band, The National’s Aaron Dessner, in a sleep-where-you-record setup that allowed them the freedom to go down more lengthy experimental avenues than before. There are new and refreshing textures to their sound, especially noticeable on ‘Dust Settles’ which – in the best possible way – has a sound that could see it sit comfortably amongst a collection of ’80s power ballads. ‘August’ is the last original song (written partly in tribute to late Frightened Rabbit lead singer Scott Hutchinson) and closes out with a sentiment that sums up the abiding feel of the album: “When nothing I can say will still you / A hand to hold / There is love all around you”.

We all need a little light in the dark right now and The Lone Bellow are happy to provide it, and if this is only the start of their journey down newly lit paths, the future looks even brighter.