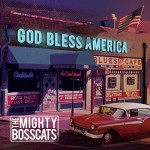 The poisonous attitudes within the American political climate continues to divide the nation and whip up unrest everywhere you turn. Protest remains consistent among the liberal americana scene and doesn’t seem to be slowing down. Well known UK based artists are getting in on the act, the latest being prolific exponent of blues-based rock n roll Richard Townend and his band The Mighty Bosscats.

His is a self-financed operation and no less professional for it, having released nine albums in the last eight years and toured relentlessly in pursuit of the audiences that flock to see a tight band perform good music at intimate venues the breadth of the country and beyond. This most recent release is the result of a road trip across the USA where he encountered the announcement of the election result in a Texan bar.

The inspiration came from a group of corporate loudmouths at the bar – Trump supporters looking to coin it in from his election. “God Bless America” came the toasts from the bar as the result was announced. ‘God Bless America‘ the album was christened. The track of the same name opens the album with a military-style drum intro before Townend delivers his observations: “Three rich white guys sat at the bar, drinking at the country’s expense…” and if you didn’t know better you would be forgiven for thinking he hailed from those Texas heartlands. As it is he graduated from Leeds University with a music degree and went on to play professionally on tour with no less than Ronnie Corbett and Les Dennis. It goes to show you never can tell…

However, as mentioned previously, he is no stranger to the finer things musically speaking and ‘God Bless America‘ is an album which is shot through with quality from start to finish. Picking out highlights would be disingenuous to the whole, the Stevie Ray Vaughan feel is tangible while hidden nuances are there to be explored with every next spin. Lyrically, Townend is a craftsman and writes with a poignancy which makes the trans-Atlantic crossing with particular grace. Seek out this album and Richard Townend’s back catalogue for a great example of a Brit taking on Uncle Sam at his own game and making more than a decent fist of it.