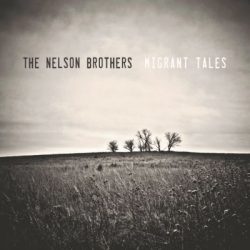 Sometimes it can be good to take your time. ‘Migrant Tales’, the fourth album from The Nelson Brothers, has been written over the course of twenty years. Loosely based on the Irish Diaspora, the songs deal with family, history, migration and travel. There are stories here that link to the past of several countries. Steve and Simon Nelson, the heart of this accomplished band, hail from Stafford in the UK but have Irish heritage and links to the United States. Their travels and their relationship with the past have clearly influenced their music in an eclectic and positive way.

As an interesting aside, when Oscar-nominated actress Elizabeth McGovern (Downton Abbey, Once Upon a Time in America) wanted a backing band to perform and record her self-penned material she enlisted the help of The Nelson Brothers, who found critical and commercial success touring the world and recording as part of her band Sadie and the Hotheads. More history and travel to add to the mix.

The music is mellow and rich Americana. Folk and country influences are just part of the palette though. ‘Migrant Tales’ is part of a wider songwriting tradition. Steve Nelson’s gravelly voice evokes Tom Waits in sound and song and his brother Simon expertly adds family depth to the singing. Expert playing throughout compliment the songs perfectly. Songs such as ‘Jesus on the Road’ evoke classic American road imagery. You can almost see the highways, prairies, cars and people. ‘Dark in the Heart’ is a piano driven ballad that feels like an old movie.

This is a collection of high quality, traditional sounding songs. It’s a relaxed listen that will take you on a journey through America and beyond. Well worth the trip.

The Nelson Brothers take you on a musical trip from Ireland to America. Definitely the scenic route.