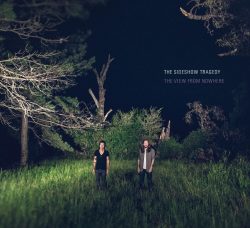 Listening to The View From Nowhere it is extremely difficult to come to terms with the fact that The Sideshow Tragedy comprises just two members in Nathan Singleton and Jeremy Harrell. The sound created by Singleton’s guitars and Harrell’s drums and percussion is akin to that of a full four or five-piece outfit. Heavily influenced by his father’s fanatical devotion to acoustic blues and National resonator guitars Singleton grew up playing in blues clubs in East Texas. Whilst devouring old blues music Nathan found himself similarly drawn to rock, punk, funk, new wave and, with influences such as Dylan, Iggy Pop and Keith Richards, the result is a duo with a heavy indie, blues, rock, roots sound.

As well as the aforementioned resonator, Singleton brings telecaster, baritone, slide and bass to the party and, although there is occasional support from producer Kenny Siegal on keys, this is very much a guitar and drum dominated affair. The songs are hard hitting, loud, and unrelenting but, and whether by coincidence or not, the songs that poke their head above the rest are those where there are supporting players.

Long Time Coming is one of those tracks on which Siegal contributes and, whilst the guitars still dominate, his Hammond B-3 brings a depth and variety to a belter of a song. With an intro that brings Fleetwood Mac/Lindsey Buckingham to mind the track features a measured, almost spoken vocal from Singleton, cracking guitar solo and driving rhythm for which the ‘repeat play’ button could have been invented.

The supporting act on Time To Taste stands out in a much more obvious fashion, featuring a memorably funky contribution from Ben Senterfit on bari and tenor sax that creates a sound like no other on the album. If there is a sax equivalent of a DJ’s scratching then this is it.

These two songs stand out mainly because there is a different feel to them. The album is described as having an adrenaline fuelled sound and it is difficult to argue with that or of the energy that Singleton and Harrell have brought to the proceedings. Stating that the album might have benefited from more changes in direction sounds churlish when, essentially, the duo have probably delivered the overall sound and feel that they set out to.

Indie, blues, funk and rock from a duo creating a sound far bigger than the sum of their parts.