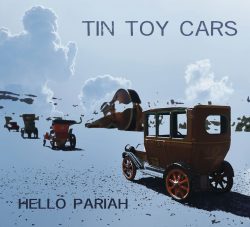 Imagine you are a seven-year veteran of Cirque du Soleil and one of your gigs is currently – well, assume not actually currently, given the state of the world – the bass player in the show “Zombie Burlesque” in Las Vegas. You are probably dipped in a glitzy theatrical world the likes of which most of us can only see in glitzy theatrical reality television shows. Well, this is Peter Fand’s background, and the group he founded, Tin Toy Cars, now have their second release, ‘Hello Pariah’. And theatrical is definitely the word to describe it.

This is an album with a host of different musical styles, themes, and pace, high-quality musicianship and is fun and serious in equal measure. There are songs that wouldn’t be out of place in a cabaret show, that cross musical time periods, and that almost remind of old-time TV show themes. Lyrically it has a certain charm and the songs use traditional and contemporary topics liberally.

This should be a bluegrass band, as they are very handy with mandolin, fiddle and guitar, and while bluegrass features on the album, this is only half the story. Clever and interesting use of these instruments along with organ and strings and some excellent vocal presentation and harmony allows for a more eclectic mix, including traditional folk, rock, old time country and even a little Baroque (but only a little).  Tracks have both light and dark elements, combinations of loud, wah-wah guitars, mystical, mesmeric cellos mixing with the bluegrass three, along with sudden changes of pace and key just to keep things interesting.

Stories of break up, booze, witches and modern-day ghosting are among themes of the songs, which underline the overall theatrical feel. The standard of musicianship is excellent, with violinist Martin St. Pierre and drummer Aaron Guidry (both Cirque du Soleil alumni), and guitarist Andrew Chute and a collection of guests, all contributing to this strong, if quirky, collection of songs.

In addition to his theatre background, Fand also spent considerable time in a traditional West African musical environment and that influence shines through on the album, particularly on tracks such as the title ‘Hello Pariah’ and ‘What If You’re Wrong’, with the violin styling and changes of pace. This is most certainly a theatrical album, but one that keeps the listener’s interest with its variety and quality. A little like a good Vegas show.

A remarkably interesting blend of musical styles and theatre