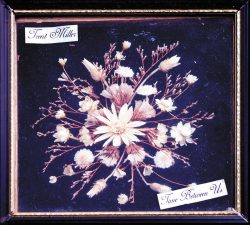 ‘Motel Rooms Of Ocean Blue’ floats in on a lovely acoustic guitar figure, the melancholic melody meanders and mesmerising strings take the tune on a detour. It’s beautiful, but it’s also the best thing on Trent Miller’s “Time Between Us” by some distance. Too often, as on the reverb and harmonica-drenched title track and the widescreen ‘How Soon Is Never’, full band arrangements target epic, but hit bluster.

The lyrics are sharp, but the tunes struggle to match them. The bright and breezy ‘Days In Winter’ rides along on a bed of Tom Petty-esque arpeggios and offers a nice tune, while ‘After The Great Betrayal’ has a great slide riff and more Heartbreakers production. This is the Londoner’s fourth album of melodic country pop, but he’s yet to step out of the shadow of his influences. True, that’s not always a bad thing, but the bruised blues and twisted folk tales dominating “Time Between Us” need more sparks to start a fire.

London-based troubadour shoots for the stars, but only hits the target on modest melodies.