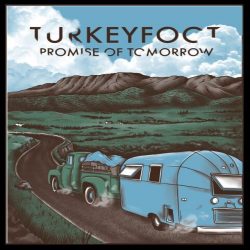 Colorado based Turkeyfoot are essentially new to recording and have only an EP produced in June 2018 prior to this their first full-length offering. Researching the story of its beginnings makes you realise what the term ‘grassroots’ can really mean. Among treats offered to supporters in a Kickstarter funding drive were a chef-cooked meal and a fly-fishing trip. Who could resist?

Speaking of grassroots Turkeyfoot is neither a brand of alcohol nor exotic vegetable matter but a type of grass,  found in Colorado.  Band members are Jordan Brandenburg (Mandolin), Michael Rudolph (Bass), Bridger Dunnagan (Fiddle), Dave Pailet (Guitar/Dobro), and Alex Koukov (Banjo), though Brandenburg and Rudolph are the only founder members remaining of a grouping that first came together in June 2016. The members are at pains to stress their democratic approach to music-making though it is conceded that Brandenburg is the leader as well as the prime vocalist. That said every band member other than Rudolph gets a compositional credit. The only non-band track is Tom Waits, ‘Old Shoes‘ which is taken at a bouncy lick and one of the highlights.

Whilst it is nice to hear a number of vocalists take the lead it is clear that Brandenburg’s is the strongest voice. The music is of blue-grass origins transported to Colorado from Kentucky and thus there are other influences at play – even Justin Timberlake is cited by one member though Bill Monroe and Flatt and Scruggs are more accurate reference points. Thinking about how their music might be perceived the following comments are offered – touching in their modesty –

“It’s approachable, it’s pretty listenable. It’s not experimental” more simply put, “It’s Colorado Western Bluegrass”. There would be no arguments with that analysis from this quarter

Where this collection really scores is in the instrumentation and it’s lovely to be able to pick out the individual players in what seems to be a very open production. One feature on the CD cover is a lengthy explanation of the provenance of the instruments played by each band member and Rudolph wins the authenticity prize for his 1953 King Mortone upright bass. Judging by the pictures its seen some hard service. The end result – well try, ‘Snagglehorn Stomp‘, an excellent instrumental.

Lyrically Turkeyfoot see themselves very much referencing the Great Depression and the Dustbowl era. ‘Load up the old Ford truck, we’ll wish this town good riddance, good luck‘. As Brandenburg explains, “I grew up hearing stories of the dust bowl and the great depression from my grandma.  My grandparents pulled up stakes at a young age and started new lives for themselves. I’ve always taken comfort in the way my grandparents overcame so many hardships in their lives.  They never lost hope, and I think their grit has served me well in my life when times get tough. The only thing we really have is hope in each other and the future, and that theme is central to the album‘.

Not unsurprisingly these sentiments easily transfer themselves to our current times and the need for positivity in a time of difficulty – and that’s not just a reference to Covid – 19. There are tales of relationships such as ‘In the Mountains, ‘Never Been That Man’ and  ‘Another Painful Lesson Learned’, the latter a story of failure, ‘We lit the match / The bridge is burned / Another painful lesson learned‘.

There are lyrics about the sense of place (mainly Colorado),’Telluride Waltz‘, ‘Comin Home,‘ and, ‘Girl from Oklahoma‘, as well as musings on questionable aspirations in, ‘Things You’ve Been Chasing‘.  Above all else, the love of Colorado will register most with the listener.

This collection will not take your ears by storm and I doubt it is meant to,  but there is a lot of quiet quality therein.  The instrumental expertise is apparent and the lyrics tell an interesting story or two.  The only question would be whether the music is best served in its democratic approach to the vocals?  That said, there are plenty of subtle pleasures to be had and if the sound of Kentucky, slightly modified, is for you then give it a listen.

Plenty of subtle pleasures to be found herein