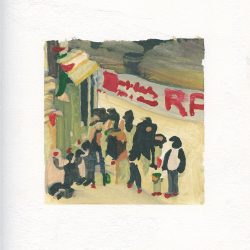 ‘Adventure’ is the follow up to 2017’s highly acclaimed ‘Rare Feeling’ – an album that earned a 10/10 review from fellow Americana-UK writer, Scott Baxter, who described it, at the time, as “the finest album I’ve been passed since I first started reviewing albums for this site some 10 years ago”. That’s quite a substantial amount of praise and I was expecting great things from this album.
The thing about reviews is that, while we strive to be as objective as possible, a certain amount of subjectivity will always come into play so, perhaps I should hold my hand up and say that Scott and I have slightly differing musical tastes.

I think it’s fair to say that, if you enjoyed ‘Rare Feeling’ then you are also likely to enjoy ‘Adventure’ – they share the same philosophical approach to their songs and a similar simple approach to song arrangements, though ‘Adventure’  is more pared back than its predecessor, with all the songs being based on a piano and/or guitar accompaniment with very little additional embellishment. They also, obviously, feature the voice of Mat Davidson, formerly of The Low Anthem, since Twain is his alter ego for his own performance work. Davidson’s voice suits these songs really well; it has a haunting quality that sits well with the muted arrangements and it’s easy to see how, if this type of music is to your taste, this album could be as well-received as the previous one.

Twain’s music is quiet and introverted in its delivery with songs that are often lyrically philosophical – “I can see so clear, I can see Inner Beauty now. I can wait for years, patience of the brave, I can see your Inner Beauty. Can you see mine too?” from ‘Inner Beauty’, a slow, atmospheric, piano-driven song that will tick all the boxes for those that like their records to be on the downbeat side. Elsewhere there’s a good song about the nature of sexuality, ‘Royal Road’, which is a very topical musing on perceptions of gender – “Man, I really hate the way they think today. It’s so black and white. Do you think your mind’s but a lady? Do you think your mind’s but a man?” And a particularly clever song about reincarnation, ‘Searching’,  that seems to be written from a woman’s perspective, seeking the love she died for in her previous life – “Thirty years on earth and still hungover from the rebirth. Acting like a kid long after everybody’s gotten over it. I don’t want to get over it.”

Lyrically the songs are all well constructed and offer much food for thought. Musically this album suffers from a lack of variety both in the structure of the songs and their pace. All these tracks take some time to get going and they all struggle to get much above walking pace; some of them are positively funereal in their delivery. Over the nine tracks on the album this can get a bit wearing. It is nice to hear Davidson stretch out musically on the rare occasions when he does so. The track ‘Working’ sees him show off his pedal steel playing and it is a joy to listen to; more of this would’ve been very welcome. Perhaps one of the reasons why this release is so low key is that it’s a digital album only; a hard copy album is planned for spring of next year but whether it will be a physical release of this recording, some variation on these tracks or completely different material remains to be seen but “Adventure” does have an unfinished feel to it – a suggestion of a work in progress.

This isn’t a bad album by any stretch of the imagination but there’s a suspicion it’s going to appeal more to those who already know and enjoy Twain’s work than those coming to him for the first time, though if wistful is your thing you should certainly check this out. The album does close with the closest it gets to an upbeat song in ‘Star Mate’ and its very positive lyric “Oh the fear can distort us; So sing a laugh, sing it proud, sing it strong. It’s gonna be a bright day.” That’s a good sentiment and one we should all live by.