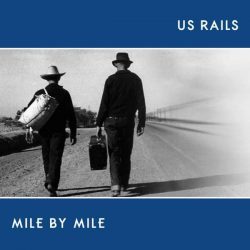 The US Rails are a group of Philadelphia based musicians, all of whom follow their own musical careers, but come together periodically to record and tour as a band. ‘Mile By Mile’ is their fifth album of original material in ten years, which is a fairly good ratio given their other commitments. Known for their vocal harmonies and rootsy sound, their new release places them on a slightly different track, one that is underpinned by a more straightforward rock sound.

‘Mile By Mile’ in many ways presents as a fairly naked attempt at a more commercially appealing sound. That in itself isn’t necessarily a bad thing; everyone needs to make a living. Nevertheless, this record sometimes tries just a bit too hard. Nowhere is this more evident than on the album’s title track. The song is very catchy, the sort of sing-along anthem that you see a succession of unremarkable indie bands performing on the BBC’s Glastonbury coverage. Elsewhere, there is more depth: ‘What You Mean To Me’ allows the song to come to the fore, whilst the R&B influenced ‘Tombstones and Tumbleweeds’ offers welcome respite from the standard rock fare largely on offer.

Towards the end of the record, ‘See The Dream’ sees the band take an overtly political stance. The song is a reflection on the state of America in the Trump era, with particular reference to racism: “Dr. King can you help us please, cos I don’t see the dream” sums up the message being broadcast here. These sentiments, as welcome as they are, ultimately don’t do enough to pull the record round. ‘Mile By Mile’ is not a bad record; you could easily envisage it gaining airplay on US radio, but ultimately its rock styling and slick production render it a bit too safe and predictable to linger very long in the memory.