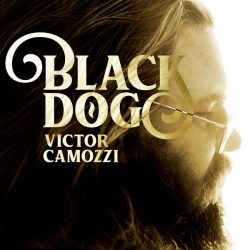 Victor Camozzi has a compelling, warbling, Texas drawl that helps frame his lyrics with a tasteful sincerity.  On his fourth album, ‘Black Dog’, Camozzi sings about all the things you would expect a bearded, long-haired cowboy from Austin, Texas to sing about.  There’s whiskey, sad nights, fast trains, and even horses he won’t ride.

Musically he at times echoes fellow Texan Robert Earl Keen with his lazy, late-night, strum and twang.  But whereas Keen paints lyrical pictures filled with complex characters and three-act tales of desperadoes and lost souls, ‘Black Dog’ is packed with familiar images and themes that we have all heard before.  There is nothing wrong with using familiar themes.  How many great songs are there about love, or loss, or family, or simply getting stoned-drunk?  What separates those songs is the depth and nuisance they approach those subjects with.  The ability to find a new meaning or revelation.  To sum up those emotions in a thoughtful couplet that helps answer a question or guide our thoughts.  It’s why we listen to singer/songwriters.  To stir thought. To stir emotion.  To find an escape.

Camozzi occasionally seems to come close to this.  When he sings “Can’t speak my troubles name” on ‘I Can’t Get Away From Me’ you want to hear more, you want to know about those troubles, but he follows that up by only scratching the surface with a litany of things he can’t do, and the connection he momentarily created slips away.

Still, Camozzi is at times a compelling songwriter, who is good at what he does. Unfortunately on ‘Black Dog’ it is nothing you have not heard before, but standard Texas-outlaw-songwriter fare best served after a late-night of drinking.