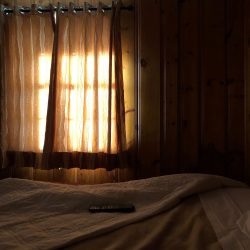 Musician, writer and painter Will Johnson, one of Americana’s most prolific creative spirits, has released his seventh solo album, ‘El Capitan’. Stripped back hardly does justice to the sparseness of this recording. It is just him, his Stella acoustic guitar recorded in his house with a little help from a few friends both nearby and afar. There is a simplicity to this record that, far from suggesting anything is missing, only highlights the care Johnson takes in his writing and arrangements.

In stark contrast to the fuzzy, cascading indie-rock of Johnson’s best-known collaboration Centro-matic, ‘El Capitan’ is sombre and bleak. With him are the same musicians from last year’s solo ‘Wire Mountain’ but without the layers of accompaniment.

Some of the songs have been with Johnson for some time. He just had not found the right home for them. Then came lockdown and as he said, “It feels like we’re at the mercy of nature now more than ever, and the quietude of this patch of time made sense to document them and finally get them out”.

To ease the listener into his new world Johnson opens with a gentle instrumental ‘Teruel’. Its serene cadence has the calming effect of an immense exhalation. As if the chilling line, “a dozen crows cower down/it’s like they know when you’re around” the distant organ chords add further eeriness to those ‘Los Cuervos’.

Johnson immerses himself in the natural world. ‘Ocean/Sea’ sounds as if he is alone on the planet such is the vastness he creates with his sparing instrumentation as he whispers “I am river, you are rain”. A line in the title track, “A race for our November crown” points to a big event that Johnson turns into a speck in the context of the time and nature.

‘Dear to the Assassin’ highlights just how nimbly Johnson conveys deep melancholy with such a light touch. Johnson’s music has been described as spooky folk which accurately describes ‘El Capitan’, a perfect embodiment of the strange world we have been inhabiting for the past six months.