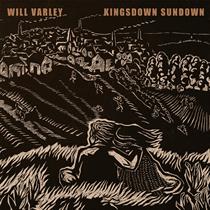 Varley’s music is likeable, decent, his sentiments are heartfelt and humane, he chips away at the status quo like a young Dylan. He doesn’t shy away from issues; these are protest songs (mostly) and in their own modest way they are uncompromising. He explores the ills of the contemporary world on songs like ‘To Build A Wall’ or ‘Something Is Breaking’ concentrating on trying to articulate the issues, rather than making them palatable. His direct honesty, his guitar playing and voice are humble instruments that help to draw the listener in.

The most overtly political song, ‘We Want Our Planet Back’ gains an electric guitar to add additional spikiness. The lyrics carry barbs too; less subtle they may be, but broad targets need heavier weapons and as Trump has just about rendered satire powerless, voices have to be heard. It’s not all relentless protest – there are more personal moments: ‘Let Your Guard Down’ and ‘Wild Bird’ are lyrical love songs, the latter receiving the flattering fluttering attention of strings to lift it.

The closing ‘We’ll Keep Making Plans’ is more abstract, a stoic message to continue on with contrasting pretty finger-picked guitar. Varley has produced a traditional sounding folk record firmly rooted in the past but facing up to contemporary ills. He does so with calmness and dignity. In this world of strategic confusion and obfuscation, the voice of the decent is lost, so let’s hear it for Will Varley blowing into a hurricane.