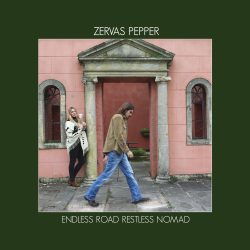 Folk rock from South Wales, with a (press release-claimed) Laurel Canyon state of mind. As a consequence this record has a distinct 1970s feel; the rock is very soft, very easy listening, perhaps too easy – there’s very little edge. Late night Radio Two springs quickly to mind. The band have played in and recorded for many esteemed places and people. This is their fifth album, so they are no meagre beginners in the game; they must be doing something right, right?

Opener ‘The Gift’ rises up in its choruses to fleetingly show some Fleetwood-esque chops. The verses are a little mundane though. ‘Restless Nomad’ follows and is poorer – Paul Zervas has the lesser appeal, vocally. Some of the lyrics here are hackneyed, somewhat uninspiring; the guitar breaks a kind of Chris Rea dull blues. ‘Gas Bottle Blue’ follows similarly – lyrically simplistic and unconvincing. ‘Salvador’ has a pleasing folky finger picked acoustic guitar introduction, but the vocals don’t live up to the early promise. ‘Catacombs’ nudges a little above its bedfellows. Kathryn Pepper has the more appealing voice of the two and she moves gently across the Nicks/Buckingham-esque groove. ‘Indian Seas’ closes the record nicely though – Pepper’s voice is a soothing salve. However, the overall feeling with this set ofsongs is of disappointment; too prevalent is a dated folk-rock sound, with too few highlights to carry the listener along the journey.