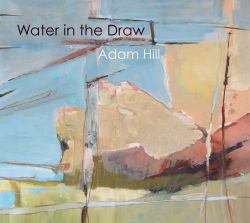 So, a Canadian folk/roots songwriter finds himself in a remote cabin on a 10,000 acre cattle ranch in Wyoming. Taking with him just his upright bass and guitar he heads for the one room where he will be holed up for a month of musical solitude. Now, whether through luck or design we are not privy but, in this far away man cave, happens to reside a grand piano.

Thus, this songwriter, who goes by the name of Adam Hill, uses his time to create an album inspired by the landscape and solitude around him using only his pen and those three musical instruments.

Much of the album has an old-time country feel to it with honky-tonk piano and the unusual skill of transferring the music and act of fiddling onto his double bass. It is not a long album, the eight tracks coming in at a little over 32 minutes, but that gives Hill ample time to translate his clear love and affinity of the remote and wild landscape around him into music and song.

He has not been afraid to experiment and use those surroundings to create unusual effects be it the lonesome coyote that serves as an introduction to ‘Magnetic North’ or the cold mountain wind whistling through the cabin door on ‘Ghost’.

Three of the tracks are instrumentals give or take the odd vocal incursion including, on ‘Liberty’, a closing speech by an orator unknown on the subject of freedom and human nature; “It’s in your hands. The future is yours. Don’t screw it up.” The desire to bring something different to the music is to be admired even if this one minute insertion might be deemed a tad preachy by some.

As a whole Adam Hill has succeeded in creating an album that celebrates the landscape in which the music was conceived. His talents with the limited array of musical instruments at his disposal are clearly evident but the sum of the whole just lacks a certain something to make it stand out or shine.

A celebration of landscape by accomplished Canadian folk/roots songwriter