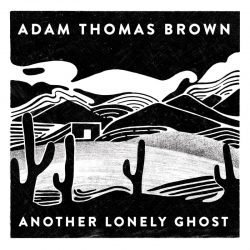 Spoiler alert: the appearance of ‘Another Lonely Ghost’ will probably not shake the foundations of either psych folk, indie-rock or alt-country, the three genres Adam Thomas Brown’s debut solo album meshes together so efficiently and gracefully. But if maybe not groundbreaking, ‘Another Lonely Ghost’ does add a distinctive, if somewhat melancholy, voice to all three genres. Its a highly polished, guitar-heavy sound  that would sometimes do full credit to any self-respecting 1990s indy rock band (to this reviewer, the echoes of REM are all but unmistakable) and which sometimes meanders into gloomy acoustic folk troubadour territory in songs like ‘Carry On’.

“We are young and we are dumb
We’ll get old and we’ll get numb.”

is Brown’s typically pithy take on the human condition in that particular, cheery, number, whilst there’s some notably sardonic thoughtful observations about small-town life, too, maybe sourced from Brown’s upbringing in East Texas, on the final song, ‘Black Sheep’.

“People here warned us this town was a circus.
Better run before you become one of the clowns.”

So if overall ‘Another Lonely Ghost’ doesn’t exactly burst at the seams with optimism – rather the opposite –  it still has a heck of a lot going for it. The nine tracks, most of them guitar-thumpers but with those few acoustic moments that help break up the pace, are all impressively well-constructed, varied and hummable, the singing is none the worse for being quite lowkey (there’s an almost complete dearth of backing vocals, for whatever reason), the lyrics often intriguing and/or insightful, the musicians obviously very versatile and almost scarily competent. Brown is not afraid to ask some pretty deep questions, too, with one of the album’s high points,  ‘Infinity’, wryly observing “Infinity, you’re killing me” whilst veering between its shimmering, dreamy semi-acoustic guitar intro and conclusion and a mid-paced rocker of a core.

So what’s not to like? Well if you wanted to be picky, you could argue that ‘Another Lonely Ghost’ could do with a few more quirky, spontaneous edges.

For example, the thundering conclusion of ‘Black Sheep’, the last song, has a medley of electric guitars and drums clearly designed to bring down the curtain with an industrial-rock-sized bang –  but it ends up sounding more like a controlled explosion, with all the musicians having dutifully donned their hardhats and protective gear prior to the carefully calibrated detonation. Even the final scream of guitar feedback at the end of the track feels like it’s been meticulously honed down to the last thousandth of a decibel.

But if ‘Another Lonely Ghost’ occasionally comes across a mite too serious for its own good, that’s probably because the artist behind it gives a strong impression of knowing exactly what he’s looking to produce, sound-wise, and duly leaving absolutely nothing to chance. And if Adam Thomas Brown was looking to kick off his solo career with a well-balanced and finely matured collation of alt-rock tracks in ‘Another Lonely Ghost’, then he’s definitely more than succeeded.

Anybody looking for unpretentious, dynamic guitar-based melodies - look no further