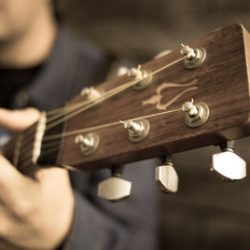 Adrian Bates is a singer songwriter and folk balladeer from South Elmsall, an ex-mining village on the border between South and West Yorkshire. It’s clear that his debut solo E.P, titled ‘Small World’ draws heavy inspiration from his birthplace. ‘Hard Workin’ Man,’ the opening song on the E.P. is about a truck driver working all hours to put food on the table for his family, “One day I’m going to get there / I’m giving all I can / Success is for the taking /  For every hard workin’ man.” It’s a reflection on the difficulties faced today by so many people in low wage, insecure employment, with the knowledge that the hard working man of the song title is ultimately unlikely to succeed in his quest for success. The key difficulties with the song are Bates’s somewhat flat vocal delivery and the rather clunky lyrics which don’t particularly scan.

The second song, ‘The Apple,’ featuring violin and cello, is a tale of marital discord arising from a father’s infidelity and his decision to leave his family, the devastating result of which is the death of the protagonist’s mother who drinks herself to death before his 16th birthday. The heart of the song is his mother’s plea to her son to take better care of the women in his own life, although he’s left to lament that he may end up on a similar trajectory to his father, as “The apple don’t fall far from the tree.”

‘Small World,’ the title track, is probably the weakest of the four songs on the E.P, and unfortunately something of a dirge.

Adrian Bates is said to take some of his influences from the likes of Neil Young, Ryan Adams, and Nick Drake. I suppose the Ryan Adams comparison is most readily apparent in the song, ‘Winding Wheels,’ which inevitably lends comparison to Ryan Adams’s famous song, ‘Winding Wheel’ from the ‘Heartbreaker’ album. ‘Winding Wheels’ appears to be a childhood reminiscence of a happy time when living with his miner father, the winding wheel of the song title a reference to the winding gear at the pit head of the colliery. But the brilliance of the Ryan Adams song only serves to rather expose the lacklustre, lo-fi nature of the Bates song in comparison.

It’s taken around 10 years for Adrian Bates to step up to the mike and perform his own songs, but whilst they don’t lack for poignancy, his rather flat, introverted vocal delivery means he may be better served in future focusing on honing his song writing craft and forming a group with a more confident singer.