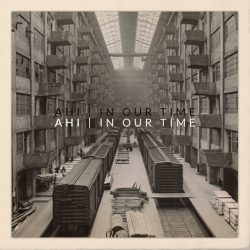 ‘In Our Time’ is the second album by the Canadian, Stingray Award-winning artist, AHI. Following his DIY-released January 2017 debut ‘We Made It Through The Wreckage,’ this is his first album on the Thirty Tigers label. With no publicity or label, AHI had developed a fan base via word-of-mouth and viral campaigns, securing spots in the Billboard Spotify Viral 50 Chart and bagging over 2.5 million (and rising) streams for his track, ‘Sweet Ol’ Day’. Building on his performance at Nashville’s DIY Musician Conference in late 2017, AHI scooped the opportunity to appear in one of NPR’s cult Tiny Desk Concerts in January 2018.

Kicking off with ‘Breaking Ground,’ AHI sets the tone for the rest of the record, sharing, “I’ve been told I’m worthless – so much that it gave me purpose” and immediately you hear why Thirty Tigers has signed this much-coveted singer-songwriter. His voice really is something special and this is a very well-produced record.

‘Straight ahead’ is a very Mumford and Sons-ish commercial offering with a strong chorus and an uplifting message, “..even though you’re on the beaten track trust your heart and don’t look back,” which is prevalent throughout this record.Clearly  AHI is a determined sort and he sounds like he is enjoying himself. There is some lovely orchestration on the sentimental ‘Made it Home’ and ‘On My Side’, both of which really showcase AHI’s fine vocals. The latter builds into a grand finale with a tasteful gospel choir.

‘The Architect’s Hand’ glides along nicely with an almost naked sound of drums, bass and guitar building slowly, subtly and effectively, and reveals to us, “..I’d tear it all down if you and I could be in a home.” It’s this classy, no-nonsense, stripped down approach to these songs that make this record so listenable. AHI really does know how to knock out a catchy melody and a big chorus. A good example of this is ‘Five Butterflies’ with romantic reminiscences.

‘The Honest One’ would not be out of place on a teenage Netflix show soundtrack and is akin to latter-day Ron Pope. Some very tasteful guitar work on the enjoyable title track ‘In our Time,’with AHI moving away from the general personal theme and more environmental call to arms: “When we woke up this morning we could tell The World had changed/we were clinging to each other through the gas and acid rain…we could be the last ones left”.