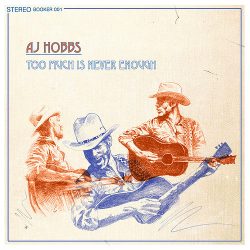 Too Much Is Never Enough may be California-born and raised singer-songwriter AJ Hobbs’ debut full-length album but he also has two EPs to his name. His first Shit Just Got Real was released under the pseudonym of Carl King, and the second The Den Sessions was recorded in one day at musician, producer Ted Russell Kamp’s studio.

Musically Hobbs combines sounds of Texas country with Californian and what he calls ‘Outlaw Soul’. Staying with the latter I have to admit there is a likeness to Sturgill Simpson to his work on the pedal steel draped The Loser, but there is nothing wrong with that! Hobbs was raised in a small one stop sign town in the desert. His father was a classical guitar player and drinking man who introduced him to country music. His mother left while he was still a child for the beach. Little wonder Hobbs has had his problems, but with good friends, a wife and producer Kamp in his circle he has now turned his life around. Songs like Merle Haggard’s The Bottle Let Me Down and his own Daddy Loved The Lord tell a great deal about Hobbs’ time on the earth.

Too Much Is Never Enough enjoys sterling honky tonk instrumental support from Aubrey Richmond (fiddle), Matt Lesser, Jim Doyle (drums), Kamp (bass guitar), John Schreffler, Jr (pedal steel guitar), Jeremy Long (pedal steel, lead guitar), Brian Whelan (organ, electric piano, clarinet) and Storm Rhode IV (guitar), plus harmony vocalists from Makeda Francisco, Oya Thomas and Kitten Kuroi. Hobbs lays down his own honest personal feelings complemented by shrewd observations of the struggles of others. Apart from following his father into becoming a fan of country music Hobbs has himself likewise battled a few demons, and with nothing too honest and real to life his song Shit Just Real loaded in some smart lead electric and pedal steel guitar to go with inspired lyrics has him hit pay dirt for not the one and only time. Others equal or better than it include fiddle warmed western swing delight Are you Going To Tennessee (that’s sung and played with gusto) and the classy melodic A Whole Lot Of You And Me.

While with him singing about a dirty old honky tonk in Houston and of how her pretty young eyes gave him the go ahead, Take It Slow has AJ joined on duet vocals by Dominique Pruitt as more evidence is provided of his worth. It does through there, because Hobbs who got to mention one of his heroes, country music outlaw Johnny Paycheck on Too Much Is Never Enough goes one better with Waylon & Merle; and he does a mighty fine job on the homage paying tune! Tomorrow I’ll Be Hurtin’ speaks in free wheeling terms of his approach to life, and how he loves to give all he’s got on stage, and of how life has its little ups and downs, as does life on the road performing music.