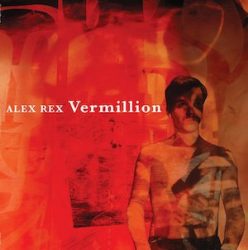 Alex Rex (as Alex Neilson) is the singer, songwriter and drummer from Tumbling Bells. And that is just the start. In musical circles and beyond, this musician from Glasgow, has a huge reputation. Rhythmically, he appears unexpectedly, for instance, in Shirley Collins’ “Lodestar” where, on the first track he is playing cymbals, and, in “Pretty Polly,” the drum beats from half way through, are his!  But “Vermillion” is his debut solo album, and as such, should be taken note of, and applauded. The title itself is a clue to the colourful and often challenging nature of the songs Alex has written. His voice bears testimony to the value of his lyrics.

Here is a voyage around the album: In order to do justice to the collection, try such a journey yourself, and be prepared to get adjusted. In Screaming Cathedral Alex shows how confounding lyrically he is, and the production throughout the album provides a perfect backdrop for this. In this track, it is the use of reverb and the screaming chorus, “And it’s horror, heaped on horror” that draw you in totally. Rex is accompanied perfectly by fellow Tumbling Bell-ee Lavinia Blackwell. There is an introduction to the images to come: “translucent Chinese lanterns,” “a dagger at the altar,” “a crying child,” “blood,” and “angelic squall.” It all sounds intriguing, unsettling, unavoidable and it is a perfect start.

The second track, Please God make me good (But not yet), establishes fascinatingly an introduction to the thoughts behind Alex’s lyrical persona. Taking St Augustine’s catch phrase, this persona leads us into thoughts about life, its chaos, routine, and, at its centre, “revolving desire.” But don’t let this put you off. The appeal of the album is its difference, and, at times, its disturbing originality.

Postcards from A Dream is the single taken from the collection, and has been a good introduction to Alex’s oeuvre. Here are the startling images: the sweetheart who died “with someone else’s skin ‘neath her nails.” And, the biblical references: Abraham, who “approached his new born child/ With a scalpel ‘tween his teeth.”

This album is without doubt an important addition to any serious collection of lyrically different music. Wherever you might dip into the collection, there are those unsteady metaphysical images. In Song for Dora it is “listlessly trailing hearses” and a girl “dancing like a spider drowning.” In The Worm Turns, it is desire as a bitch, and the singer as a liar “Rehearsing his chaos.” And, all the time, there is Alex singing impressively and distinctly, living his words. This is a record that demands to be listened to and must not be missed.

An excellent singing debut. Look out for Alex Rex and his lyrics.