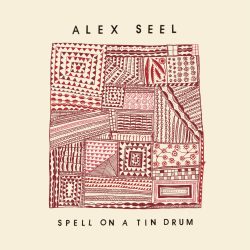 Wandering singer-songwriter Alex Seel has been from Devon to London to Ireland and back again, picking up on as many musical influences as possible along the way. On his second record, ‘Spell On A Tin Drum’, he went to the dysfunctional method of writing the majority of it in a caravan on the west coast of Ireland and recording under a bed in London.

The result sounds far more polished than its this process would suggest. Smooth production suits Seel’s gentle vocal, which recalls David Gilmour and George Harrison at various points throughout the record. The otherworldly ‘Blue Sky In Our Hands’ particularly recalls the former, with an ethereal ‘Dark Side Of The Moon’-inspired mystique.

The opening double-header of ‘Take This Guitar’ and ‘Eyes Wider Than’ showcase Seel’s penchant for virtuosic guitar-playing, over a range of moods. The former is an intricate ode to the power of his instrument, whereas the latter is a far more upbeat affair, as the Londoner stretches his fretboard as far as it will go.

After the hauntingly excellent ‘The River’, the record peters out with a meandering ‘Before The Sun Goes Down’ and forgettable single ‘Satellites’. The instrumental ‘Quietus’, which closes proceedings, is needless self-indulgence.

On ‘Spell On A Tin Drum’, Seel has honed his songwriting and guitar-playing which has resulted in a solid piece of work. These songs deserve to be heard outwith songwriter’s circles.