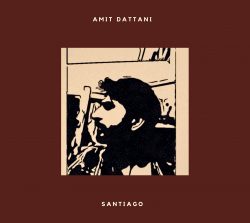 Fingerpicking roots guitarist Amit Dattani has set the bar high for his debut release ‘Santiago’ which features some beautiful playing as well as some noteworthy songwriting. Opening with the title track, he sets the tone early on. This is going to be a folk guitarist’s album; soft sometimes hushed vocals sitting atop some complex picking. It’s as simple as that but the simplicity of the equation undervalues the overall sense of worth created by this work. Each song is a nugget in a seam of precious stuff – hand hewn and lovingly put together.

Sometimes reeling off into related melodies such as in ‘Home’ whilst at other times retaining a clear unadorned pattern of play such as with ‘Izzy’, an instrumental right out of the Jansch songbook, all twitchy and tightly sprung. The slower, more measured songs appear to have more heft such as the delightful ‘Swing and Turn’ or the album closer ‘Hummingbird’ both beautiful and stark.

Dattani needs to work on colouring in the sketches that he has created here. They are beautiful charcoal drawings that sometimes won’t need the colour extra instruments can bring but I suspect the addition of other tones would lift this lovely work towards the sublime.

The simple beauty of a man with guitar singing songs