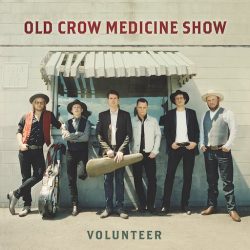 ‘A World Away’ bursts out of the speakers sounding like another time and another place and all seems right in the world. Well, wrong, as it’s a refugee song… but you know what I mean. Old Crow Medicine Show are back – and this time there’s electric guitars!  There’s the usual rollick and roll, too, but ‘Volunteer’ sparkles and shines with more urgency than the greatest band Bob Dylan never had in a long time. Recorded at the historic RCA Studio A and produced by man-of-the-moment Dave Cobb, there’s an ache in the soul of ‘Volunteer’ that never truly reconciles with the recklessness and rhythms of reels like the auld time ‘Shout Mountain Music’ and ‘Elzick’s Farewell’.

‘Look Away’ is an early highlight, though. A story of the south set to a familiar chord sequence and melody, Ketch Secor’s singing sets it apart from any homage, with a gorgeous chorus and fiddle break, as lyrics like “cold butter, milk and honey mean more than a pocketful of money” break your heart all over again.

‘Dixie Avenue’ and ‘Child Of The Mississippi’ sound fresh and aware at the same time, and the lilting ‘Old Hickory’ makes you want to reach for that battered copy of ‘… Big Pink,’ but it’s the sound of people playing music together in a room that is the real draw of ‘Volunteer’.

Producer Dave Cobb may be making his name by reshaping songs of the south with the likes of Jason Isbell, but for their 20th anniversary he’s managed to stop the clocks again with Old Crow Medicine Show.

Old magicians revisit and redefine their favourite tricks for this 20th anniversary celebration.