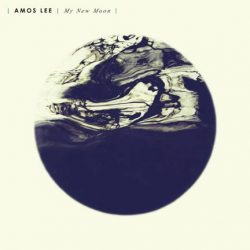 ‘My New Moon’ Amos Lee’s seventh full length album (discounting the 2015 ‘Live at Red Rocks’ release with The Colorado Symphony) on which he continues to blend soul and jazz on a pallet of 1970s style James Taylor singer song-writing to create a rich and bright Americana soulful folk. His music is entertaining and comforting with his soulful voice it is hard not to be welcomed into his sunny landscapes.

But at the same time he challenges his listeners; pay attention to the lyrics and it’s clear these are no half-hearted scribbles of a tunesmith that just needs some, any, words. That Lee can skilfully mix what could easily end up as a hotch-potch of ‘let’s try a new style’ tunes is evident in the people who rate him. At various times he has been the opening act for B.B King, Norah Jones, Dylan and Springsteen and had Lucinda Williams, Willie Nelson, Priscilla Ahn and Sam Beam guest on his albums. Lee has an ability to fill spaces; his music positions him betwixt and between other artists and he has the talent it to pull off in a very satisfying way. In the foreground of the album are the more acoustically driven songs. These usually have love – of course – as a recurring theme. But even then these are tunes about relationships as solid architecture rather than fleeting heartbeats. The bolder themes move personal relationships aside to shine a light on creating strength from adversity . The opening song ‘No More Darkness, No More Light’ was, apparently re-written several times before honing in on the inspiration of positive change that emerged from the tragedy of the Parkland shootings.

This isn’t an album to get you up and dancing; it entertains by making its contrasts evident. It’s a Sunday morning record, but not in a ‘morning after the night before way’. It is a record that is both being in the kitchen when the radio is oozing a ‘Sunday morning love songs’ show and moving into the lounge where Sunday mornings means politics on TV and a chance to reflect on just what the hell is going on.

Musically, lyrical themes and motifs re-occur, Lee coaxing his soulful side for the love songs, occasionally dabbling with gospel to add seasoning. Other themes are signalled by musical gear shifts; ‘No More Darkness, No More Light’ is reminiscent of Graceland era Paul Simon, while ‘Louisville’ echoes Springsteen. Lee brings all this together beautifully in the best tune on the album ‘Don’t Give a Damn Anymore’ starts like Gaye and Terrell’s ‘Ain’t No Mountain High Enough,’ before surprising the listener with a sleight of hand that swaps Motown lift for Nick Cave introspection.

‘My New Moon’ will appeal more to listeners who embrace Lee’s soulful side and in truth those songs make up most of this release, but it is a commendable contribution to the maybe less explored musical regions of Americana.

Love, politics and a whole lot of soul underpin an enjoyable album