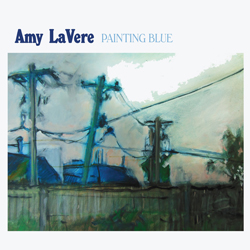 ‘No Battle Hymn’, the striking first single from ‘Painting Blue’, the fifth album by Memphis-based Amy LaVere, is a timely anthem for a world in crisis. “No one’s ready to admit we may be out of time,” she sings, over a slick, yet moody, blues-pop groove, with some chunky organ riffs and mean electric guitar licks, coming across like an edgier Sheryl Crow. Although its lyrics tackle defeatism, it’s ultimately a hopeful song, which calls for unification: “We need a victory march in our hearts.”

Penned by LaVere and her husband, Will Sexton, who produced ‘Painting Blue’, it’s a key track on an album that she says was written under a dark cloud of melancholy and against a backdrop of doom and gloom. LaVere highlights Trump’s 2016 election victory, global warming and racist and civil tensions as some of the issues that acted as a trigger for the record.

LaVere turns Costello’s dramatic piano and trumpet ballad into a gorgeous and delicate, stripped-down, folk-jazz song, with acoustic guitar and accordion. Her version of Martyn’s chill-out classic is the opener on the album and is seriously bewitching. With childlike vocals, jazzy piano and haunting, twangy ’50s-style guitar, it should be on the soundtrack of a film noir.

It’s not just social issues that have inspired this record – LaVere also tackles personal politics and lays herself bare more than once. The infectious ‘Painting Blue On Everything’ – one of the more up-tempo moments – deals with depression, the emotional, string-laden ‘No Room For Baby’ outlines the reasons she hasn’t had children – “I stay in a little house that’s not even mine…. I’m always low on money, I work all the time”, and the intimate country song ‘Love I’ve Missed’ is about the fear people can experience in the early stages of a relationship.

Things lighten up on the playful, laidback and funky soul of ‘Not In Memphis’ – a tongue-in-cheek look at what happens to someone when they’re stuck at home while their partner is away travelling.

Sexton’s production is impressive – although some of the subject matter is dark and melancholy, this is a lovely sounding record that’s warm and immersive. ‘Painting Blue’ is a strong and classy collection of songs created with a rich sonic palette.

A richly rewarding album that deals with dark and personal issues