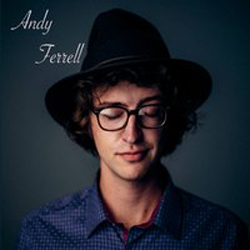 As football commentators love to say, “It’s a game of two halves” and the same goes for North Carolina’s Andy Ferrell’s debut album. Comprised of 12 songs the first six were recorded in Nashville with a band complement while the remainder are a capture of a solo show in his home town of Boone effectively reminding this reviewer of the days when one had to flip a disc over midway through listening. It’s not only the reminder of this old ritual that recalls the “good old days” when listening to At Home And In Nashville as Ferrell is yet another of these youngsters who are looking to singers and songwriters from the seventies for inspiration. Ferrell notes Townes Van Zandt as one of his heroes but on listening to the album there are reminders of Arlo Guthrie and Loudon Wainwright to be heard while the live tracks span a tradition that goes back to Woody Guthrie.

The Nashville songs are impressive indeed with Ferrell backed by an ace band playing pedal and lap steel, banjo, Dobro, fiddle, accordion, keyboards, bass and drums resulting in several engaging country jaunts along with some intimate moments. “Last Dime Blues,” the opening song, zips along splendidly with fiddle to the fore recalling the late Dan Hicks. “Another New Year’s Eve” relaxes somewhat as Ferrell delivers a sly set of vignettes related to the festivities, his keen eye matched by the wonderful backing which has a slight Cajun touch. With an excellent burbling double bass leading into a brief snippet of Auld Lang Syne to wind up the proceedings Ferrell here is akin to Loudon Wainwright’s observations although without the caustic wit and just as Wainwright can offer up a sentimental song without syrup so can Ferrell on the excellent “Photographs And Letters”. There’s a bit more grit on the tugboat rhythm of “Poor Man’s Son” which oozes Southern Country Soul while “Time Crawls By” could have been written and sung by Steve Young back in the days, the mournful accompaniment just perfect as Ferrell offers up a magnificent set of lyrics that are emotive and evocative and stained with regret. Side One (yip, I’m going with that) ends with the barrelling Western Swing of “Nobody To Answer To” which comes as somewhat of a surprise but Ferrell again dives in and comes up smelling of roses as the song is a perfect capture of the style with the band really wigging out.

Side Two is the live side, Ferrell and guitar on stage. While one might have wished for more of the studio stuff there’s no short changing here as he again shows that he has mastered several styles with “High Water, Low Bridge” coming across like a Hank Williams’ song while “Run Billy Run” riffs along on Woody Guthrie’s tales of Billy The Kid. Along with songs that could have come from the pen of John Prine (“The Price Of Freedom” and “Merry Christmas Joe”) Ferrell also shows that he’s no mean picker on the guitar.