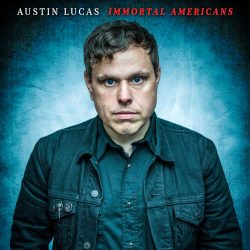 ‘Immortal Americans’, the seventh studio album by Indiana native Austin Lucas, arrives on the back of several challenges and changes faced in his personal life. Having moved back to his hometown of Bloomington after a twenty-year absence, Lucas broke free from his record label, and also got sober. During this period, his partner discovered she had cancer, leading to an extended period in which he was the primary career for her. His songwriting, however, did not cease. The writing sessions on his acoustic guitar while his suffering lover was asleep in the next room has led to the more intimate feel of this calmed-down punk’s new record.

On the title track which opens proceedings, Lucas takes observational pride in the almost clichéd personality traits of the kind of America which he belongs to, and is reminiscent of Jason Isbell’s self-proclaimed ‘Nashville Sound.’ It is the struggles of working Americans that are Lucas’ primary focus. He sings “you wanna get high, cause living low is all you know” on ‘Happy’, which is ironically titled, but ultimately delivers a message of positivity. On ‘The Shadow and Marie,’ written about his partner’s battle with cancer, Lucas gives an emotive performance, with his admiration of her bravery evident as he sings “you are never weak, though your fingers may be cold”.

The real highlight, however, is the exquisite ‘Between The Leaves’, which is an intimate affair with minimal production, exposing Lucas in his rawest form. The lyrics are self-analytical with Lucas telling of how he longs “to better myself, but only enough to talk that big talk like every little brother does”. It is one of the few occasions that he takes a step back to take a look at himself, and it is the most rewarding track on the record.

On ‘Immortal Americans’, Austin Lucas delivers an inspired collection of modern Americana with leanings towards alt-country and Tom Petty style soundscapes. It may have taken a tumultuous period of his life to inspire them, but Lucas’ songwriting is as strong as it’s ever been.