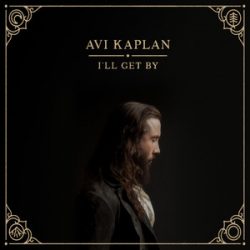 Avi Kaplan was part of the hugely successful Grammy winning a cappella band Pentatonix before leaving in 2017 to pursue a solo career rooted more in the folk music he describes as his heart and soul.  Three years on and ‘I’ll Get By’ has Kaplan broadening his range just a tad, introducing a touch of soul to a debut EP that remains true to his a cappella grounding.

Lovers of Kaplan’s previous incarnation should gravitate to the opening track ‘Change On The Rise’ where Kaplan’s deep vocals are allowed to soar with minimal accompaniment. The soul influence is evident here and background harmonies bring a touch of gospel to proceedings. If this song is the most obvious nod to that vocal past then, whatever the style of the subsequent tracks, it is Kaplan’s vocal range that is the common thread.

‘Chains’ allows these vocals to hit ever greater basal depths, similar in style to the opener but with a greater tempo and the introduction of guitar and tribal drums to add gravity to the song. At times it feels as if Kaplan is using the EP as an experiment in sound, feeling his way for what works alongside his particular vocal style. In this regard ‘Chains’ is a highpoint.

That aforementioned move towards his folk roots is demonstrated best both on the title track and ‘Sweet Adeline Pt.2’ where these acoustic driven songs and change in vocal tone bring Glen Campbell to mind. This swerve in style works well for Kaplan and brings him as close to pure country/folk as can be found on the EP.

For all the qualities that Kaplan’s vocals bring to the table, along with some bold experimental musical accompaniments, there are missteps that detract from the songs themselves. Notably on ‘It Knows Me’ a classy intro of subtle and building tribal drums and hymnal vocals brought crashing down to earth with a whistling chorus.

The seven-track collection concludes with the beautifully dream like and ethereal ‘Full Moon’, another change of style and pace that swirls around the room with a hypnotic grace. This is a gorgeous closing track and ends proceedings on a high that isn’t quite matched by some of the missteps that have gone before.