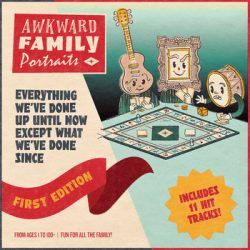 Awkward Family Portraits are a Glaswegian group in the fine tradition of Commander Cody and His Lost Planet Airmen, Dan Hicks and His Hot Licks and on the UK front, Chilli Willi and The Red Hot Peppers from the pub rock era. Reflecting this tradition these self-composed songs cover rock and roll, rockabilly, western swing, 1920s through 1950s jazz, bluegrass, gypsy jazz and jump blues with largely fun lyrics that will bring a smile to everyone’s face. However, whatever the influences and genres of music covered they play music to dance to which has always been one of the prime functions of music.

The group, formed in 2016 by like-minded young musicians, has been making a bit of a stir north of the border, having released two singles and being named Tenement TV’s “One to Watch” in 2018 before the release of their crowdfunded debut album ‘Everything We’ve Done Up Until Now Except What We Have Done Since’ on Holy Smokes Records.

While this is a young band they take their musical responsibilities very seriously and demonstrate real musical skill with all four members contributing to the overall sound. The album cover is suitably retro and reflects the contents. Listeners are left in no doubt of Awkward Family Portraits’ manifesto by the first track ‘AFP Theme’ which is in the style of ’40s and ’50s American radio introductions. Things really get going with ‘Keep On Keepin’ On’ with its lively jazz rhythm that is hard to resist.

Just to show that Awkward Family Portraits can tackle various tempos ‘Chapati 3’ offers a change of pace. The next two tracks ‘Can’t Control Cupid’ and ‘Do Yourself A Favour’ pick up the tempo again in a rockabilly style with subtle instrumental flourishes that demonstrate the group’s musical chops. There then follows another change of pace with ‘Way The Wind Blows’, a waltz which takes us back to the ’50s with echoes of Elvis as he moved more towards movie soundtracks or any number of popular crooners of the time.

‘Kick The Bucket’ is another old style swing number but the lyrics are very modern, focusing on the climate crisis. Next up is another fun rockabilly track ‘Day In The Life Of A Dying Man’, before the album closes with three strong tracks. You don’t need any explanation why a track with a title like ‘Don’t Drink Whiskey It’s Risky’ is such great fun. Real-life whimsy is reflected in ‘Ring, Ring, Angus’ which is about a friend of the band who never answers his phone. There is a self-produced YouTube video of the track which captures the band’s humour.

The album finishes on a high note with ‘Come On Down’ which is the most mature song on the album and is less of an obvious pastiche and indicates how the band could develop.

Grounded by solid musicianship across the board with the fiddle and guitar emphasising the swinging aspects of the music – and supported by a reliable rhythm section lead by great bass lines with no hint of their Scottish heritage in the vocals the music – while largely derivative, is great fun and expertly played.

Do You, Do You Wanna Dance to some Scottish Americana