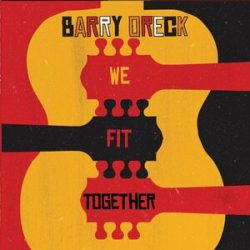 Barry Oreck’s new EP; ‘We Fit Together’ is a ‘message’ record, which we know because he has told us so, in unequivocal terms. He has released the record earlier than planned because he believes in its ability to capture the zeitgeist and to speak ‘hard hitting’ truths to power “… five songs that are all highly relevant to the current situation”.

That the record’s release was rushed through to get the message into the public domain speaks volumes about Oreck’s belief in the prescience of what he has to say “I realised I had to get these songs out in the world sooner rather than later”. This clearly invites a closer inspection of the message as the core element of the record.

What Oreck wants us to know is that people “do and can fit together – all of us, all over the globe, across economic circumstances and political ideologies”. This is a message that is communicated directly and consistently across the record and all the promotional support that has gone into it. The individual songs all deal with the theme in different ways; fitting with a romantic partner, with the global community or with nature for example and the collective vitality they generate is targeted at the political (small and large P) cause in question.

Now, one would have to be churlish in the extreme (or have the title Commander in Chief) to find fault with these sentiments in their basic form. But really… in the context of divisive American (global) politics and often unprecedented civil unrest, is the best we have to offer ‘if we all stick together we can make things better’?

Hopefully not; for two reasons. Firstly it’s just a vague and frankly naïve message that we have heard many times before. Oreck does not offer us any clarification or new insights beyond some clumsy similes along the lines of ‘toes in socks/keys in locks’ and ‘hand in pocket/fuel in rocket’ (!!), or the simplest of songs “about how all people can get along” – more than once over the course of the record we expect to see Blue Mink’s ‘melting pot’ being brought out of storage. This cosy message simply fails to connect with those who have even the vaguest sense of challenge or questioning in their world view, in the current climate the message rings hollow.

We can see for ourselves that divisive nationalism, mutual distrust and rampant self-interest are at the heart of political power in regimes across the globe so simply reminding us that ‘We Fit Together’ is not going to change the mind-set of these heathens, nor is it going to help most of us to feel better even for the duration of a song.

This brings us directly to the second reason why the record fails in its mission. Oreck has talked about wanting people to be “motivated to take action” by the record, another reason behind its urgent release. Unfortunately it singularly fails to do this, barely managing to raise us from our box-set induced lethargy never mind generating the energy to take us to the streets.

What speaks more directly to collective action is the simple clarity and invigorating anger of a song like Florence Reese’s ‘Which Side are You On?’ It may have been written over 90 years ago but has been reinterpreted and re-used many times since as a way to rally people to action in service of a particular cause or struggle; most notably in recent times by the Black Lives Matter movement. The song has always maintained its oppositional stance, calling on us to choose, and fight for, a side. Reese’s original asking “Which side are you on, if you go to Harlan County, there is no neutral there – You’ll either be a union man or a thug for JH Blair”.

An updated response to the current events concerning Oreck in this record, might note that right now we live in a ‘binary world’ and we must therefore choose between truth and justice or lies, hate and exclusion, ‘which side are you on’ indeed.  We are not, for instance, beginning to see the dismantling of the iconography celebrating Britain’s colonial past because we have been persuaded that in fact ‘we all belong together’ and if we just realised this we could all get along.

Sonically too the record seems intent on avoiding conflict and fitting in as much as possible. It is a relatively tuneful acoustic folk sound, more UK than US folk, with decent enough picking and some nice harmonies. There are hummable but somewhat forgettable melodies and a slightly lumpen rhythmic underpinning; all of which delivers a pleasant but ultimately humdrum 25 minutes. The violin of Rima Fand provides the only real point of interest, weaving through the arrangements; one minute sounding abrasive and at odds with the setting, the next sketching out fragile and welcoming melody lines.

So in the final assessment then ‘We Fit Together’ is a nice record, with nice sentiments from a nice man (probably).  If that sounds up your street, then be my guest. However, if you want more from your music at this time (or any time for that matter) then you should look elsewhere.