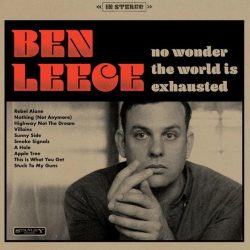 When this Aussie’s previous band Delta Lions (think Replacements?) drifted to a close, Ben Leece decided his side interest of (alt) country could be his future, and set about some concentrated songwriting. The result is a very strong set of stand alone songs with a range of styles and influences made a coherent whole by outstanding production. Leece took his songs to Australian country stalwart Shane Nicholson who produced, engineered and played on the album, and essentially mentored Leece in his new direction.

Lecce’s songs and voice are the two obvious strengths, which are forefront, balanced with some delightful instrumentation, especially from Jason Walker on gorgeous pedal steel on more than half the tracks. Influences are clear, Jason Isbell especially, on ‘Nothing (Not Anymore)’, and Ryan Adams- overtly so on ‘Villains’, as his inflections are a direct lift from ‘Come Pick Me Up’. It’s not all alt. though; if he changed his references from cocaine to whiskey, cut out the swearing and added references to his flatbed, some of this album would be in bro-country territory.

Opener ‘Rebel Alone’ is power pop, and penultimate track ‘This Is What You Get’ starts mournfully before suddenly going all ‘2112’ halfway through, to brilliant effect, then the album finishes with a gentle acoustic. Leece has a way with words, “stuck in a shit old town, second best hotel” from ‘Highway Not The Dream’ an example of his vivid lyrics. The different shades of country allowed to blossom by consistently high execution and assembly, give us a cogent album, which at a perfect 10 tracks/36 minutes is tempting to just leave on repeat on your player, it’s such an engaging sound.