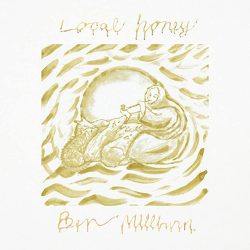 It was Marcel Proust who wrote: ‘To a young pup in love, a bitch’s ass smells sweet.’ Austin, Texas resident, Ben Milburn has testified a true story, on his new ‘Local Honey’ EP, that to this young pooch, his beloved was the sweetest, most fragrant thing he had ever experienced in his life; before she finished him, crushed under heel like an empty packet of cigarettes; dismissed like a dog, pausing only to yell, ‘Smell ya later, Sucka!’ Milburn’s EP is like a mini-opera in four acts: boy meets girl, boy adores girl, girl fools boy into thinking she likes him too, then girl takes him for all he’s got and throws him away like an empty book of motel matches.

The stark, minimal sound of guitar-strummed ‘Honey, Help Me’ captures his hopeful but pathetic pleading on meeting this gorgeous honey for the first time. He’s captivated, intoxicated by her physical form, the space she inhabits in the world, but not by her smile. She rarely, if ever smiles. To Jenny Lee, it’s all business, bud. Take it or leave it. And you’d better leave it, Ben. Leave those President’s heads on the bedside table, or there’ll be big trouble.

The vocal delivery on ‘I’ll Go’ recalls Lennon at his most pained and emotive, singing ‘Mother’ or the chorus of ‘Instant Karma’. Ben’s laying his sensitive and compassionate heart on the line, while she summons the 3.10 to Lack of Humour, to crush and obliterate his lovelorn flesh. She watches his blood coagulate in the heat of the Texas desert while her cold, cold heart feels nothing but indifference and impatient, irritation.

Freud said that romantic infatuation is ‘a kind of sickness and craziness, an illusion as to what the loved person is really like.’ The boy has been deluding himself. Ben, get a grip, sir. Pull yourself together. Why not sublimate that energy. As old Monsieur Binet advised to the lovesick in Madame Bovary: ‘You ought to have a hobby. Why not get yourself a lathe?’

But Milburn has already got a hobby, he’s a musician. He processes the anguish and pain through his art. ‘Baby Meet the Boom’ encapsulates all he’s been feeling, with an epic, emotive vocal, supported by the elegiac backing vocals of Ashley Cowart. He can write and play his way through his sorrow and disappointment.

This ‘Local Honey’ EP is the second in a series of EP’s Milburn calls ‘The Balance EP’s’. The first one, ‘Strange Love & Consequence’, was released about a year ago. Check his interesting video on YouTube for ‘Don’t You Wait’, from that first EP. He’s been living with unrequited love and desire for quite some time. Here is a man who knows all there is to know about worshipping the Goddess.

This second EP is more stripped back and minimal than the first, but the almost Zen-like simple beauty exudes the rawness of his pain. The music’s sonority makes one empathise with what he’s been through and what he is feeling.

The final track ‘Jenny Lee’ sees the inevitable, awful ending to Ben’s one-way romance. ‘Thought we’d make it steady/ all these things have gone wrong/ Jenny Lee, what you’ve done/Jenny Lee what you’ve done to me/ She’ll take what’s mine and go/she’ll take the next man’s gold/Jenny Lee/oh Jenny Lee.’

Sounds like that man felt the hurt pretty bad. Plato said that ‘love is but a serious mental disease,’ if that’s any consolation?’ Free the mind and the rest shall follow. Concentrate your energies into making a longer work next. On the evidence of the first two EP’s, that would be one hell of an album. And what did Sartre say? Hell is other people, my friend.