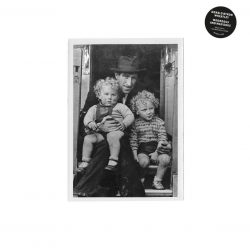 Rear-ended by a car which sent me and my bicycle flying through the air, the kerb-stone rose up and smashed me in the face. Paramedics diagnosed a broken nose, fractured arm, wrist and cracked ribs, and as I lay there bleeding, I pondered that the only other thing to have made such an impact on me recently is this amazing new album by Donald Byron Wheatley. Moondogs and Mad Dogs is essentially a tribute by Wheatley to his father ‘Big Don’, who came from a family of showmen who have worked on fairgrounds up and down our fair land for the past one hundred and fifty years. ‘Big Don’ turned little Donald on to the kind of music he loved and would play to him both on record and on his acoustic guitar: Bob Dylan, Muddy Waters, and singers like Bessie Smith, Big Mama Ford and Van Morrison.
At his recent Nobel Lecture, His Bobness spoke of “the music that I loved – the music I grew up on: country western, rock ‘n’ roll, and rhythm and blues.” He went on to reveal that “by listening to all the early folk artists and singing the songs yourself, you pick up the vernacular. You internalize it. You sing it in the ragtime blues, work songs, Georgia sea shanties, Appalachian ballads and cowboy songs. You hear all the finer points, and you learn the details.”

The music becomes you. This is exactly what happened to Wheatley, now in this business some of us call show with the release of his first record. He has absorbed all those musical tropes from his dad’s collection and displays those influences proudly from his chest, the way a war veteran shows off their medals. Snatches of Dylan, Ian Hunter, Odetta, Steve Marriott, Rod Stewart, Kevin Coyne, and even Sean Ryder, go to make up Donald’s distinctive and highly pleasing vocal.

Recorded at Reservoir Studios in Stroud Green, North London and co-produced by Chris Clarke, the extraordinary bass player from Danny and The Champions of the World, and Donald’s cousin – John Wheatley, front man with the Suburban Dirts, the album is a glorious collection of extremely hooky, uplifting songs with deft arrangements that have a way of entering the noggin, turning on the electricity and taking up squatter’s rights, the way Joe Strummer did at 101 Walterton Road.

Hand Me Down Leopard Skin Hat could be an unreleased gem from Blonde on Blonde, which Edie Sedgwick would get her groove on to with relish, were she still with us. It rocks along, with some searing harmonica and guitar, and an irresistible piano groove that gets more than the toes tapping, underpinned by a solid bass that does a groovy funky run about two minutes in.

Smoking Gun has a similar melodic magnificence as Handbags and Gladrags, it perhaps leans more towards Rod’s interpretation than the Stereophonics version. The accompanying video is a fascinating archive of Wheatley family photos that document their life assembling, working on and dismantling rides like the Ghost Train, the Haunted House and the Helter Skelter, which was the Wheatley family speciality. Donald says that he found it challenging, dismantling the Helter Skelter in the middle of the night in the wind and rain “without a harness.” Don’t blame you, mate, who wouldn’t? Social historians will value the photo archive, and I’m certain Martin Parr would love it, as there is something quintessentially and wonderfully British about the images.

Although that statement has to qualified as, to be fair, fairgrounds are popular all over the world, particularly in the States. Wheatley’s family business and tradition brings to mind Colonel Tom Parker who was also a showman and worked on fairgrounds and carnivals in the US before he became Elvis Presley’s manager. In the second half of his seminal biography, Careless Love: The Unmaking of Elvis Presley, the God-like Peter Guralnick regales us with the information that Parker had his own showmen club called The Snowmen’s League, “a W.C Fieldsian celebrity roll without meetings or reality outside the Colonel’s sardonic imagination which cost nothing to get into and $10,000 to get out of.” The Colonel used to run the dancing chicken stand at the fairground, which used a hidden hotplate to make the long-suffering birds dance. Jerry Leiber recalls the time the Colonel said he’d slip a publishing contract for Lieber under his hotel door. The paper was blank except for the line for Leiber to sign his moniker. When he questioned Parker about it the next day, the good Colonel allegedly said “Don’t worry about that, Jerry, I’ll fill in all the rest later.” But I digress…

An exquisite animation by Poppy Rand and Tim Wheatley (another talented member of the family?) accompanies sublime track The Lonesome Carol of Big Don, a homage to Wheatley’s father, the title obviously a bit of wordplay on The Lonesome Death of Hattie Carroll and which cements Wheatley’s devotion to his musical mentor, Don senior. The song again features some amazing harmonica from Judd Lander who played on Culture Club’s Church of the Poison Mind, riffing alongside a sublime string arrangement.

‘Big Don’ suffered a stroke at the age of 49 and his days of assembling the Helter Skelter were over, but the music lover in him persisted and he set up a Pro Tools studio in his flat, which he operated with his one functioning arm, laying down tracks until his untimely death three years later. It was this methodology that encouraged Donald to begin composing the remarkable songs for Moondogs and Mad Dogs. He carried on using the Pro Tools equipment left him by his Pop to craft his initial demos.

The Lonesome Carol video shows some delightful coloured pencil stop-frame animation that shows ‘Big Don’ building the Haunted House and a sequence that choreographs the gondola’s swimming through the air in a beautiful Umbrellas of Cherbourg style waltz. It also movingly documents the moment the Big Fella suffered his cerebrovascular accident.

It was King Lear who famously told his daughter, Cordelia, that ‘Nothing will come from nothing.’ It’s different in this instance. Nothing has the Lennonesque yang, to the yin of George Harrison’s Something, and which could have been taken from Abbey Road or Shaved Fish and has a chorus as catchy and long-lasting as The Beatles legacy, with a string section guaranteed to soothe even the hardest heart.

The Velvets and Booker T and the MG’S Time Is Tight influenced groove Fighting for the Sunlight features some blistering pedal steel from BJ Cole and a chorus lick that‘s so much I’m Waiting for the Man – what more could a music lover ask for?

Sticks and kerb-stones may have broken my bones, but Donald’s stirring and groovy voice has been the panacea to hasten and sustain my healing and recuperation.

Don’t forget to wear your helmet next time you go riding your trusty steed, brothers and sisters, otherwise you might end up like me…and become a writer.

My favourite album of 2017 so far. A melodic masterpiece. Irresistible.