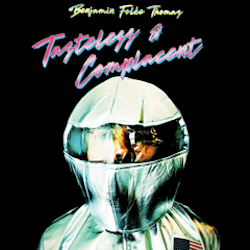 Benjamin Folke Thomas’ musical career was kick-started when his second album – ‘Rogue State of Mind’ – caught the ear of Radio 2’s Bob Harris, who invited the Swedish troubadour to Nashville as part of BBC Introducing. An accomplished finger-picker, Thomas boasts a baritone vocal timbre that sits somewhere between Johnny Cash and Tom Petty. As a child, he was hooked on Americana by Kurt Cobain’s era-defining performance of Leadbelly’s ‘In the Pines’ on MTV Unplugged and he departed his native Gothenburg to hone his craft in the bars and clubs of London. ‘Modern Man’ was written upon his return to Sweden and, as he turns 30, sees him taking stock of his life as a singer-songwriter.

The autobiographical nature of Thomas’ approach on this album is immediately evident on ‘One Day’ – a song where he addresses hypothetical pop stardom. The early days are dealt with in the line, “I admit I wasn’t very good, I was trying too hard to be misunderstood,” while he then goes on to imagine how success might affect him; “And I’ll become right wing – forget about the poverty and the troubles that I’ve been in.” Such an image is typical of the singer’s sardonic humour.

A range of tempos and styles are on offer; on the one hand is the poppy ‘Tasteless and Complacent,’ underpinned by its radio friendly “ooh-ooh” backing vocals, while on the other, the overdriven guitars of the epic ‘Dead Horizon,’ bring to mind Crazy Horse. However, it’s on the slower, more introspective numbers where Thomas really shines. ‘Stuff of Dreams’ focuses on a fantasy meeting with Hollywood star Paul Newman. Its conversational style perfectly suits the subject matter and lines such as “no troubles, no worries, there shall be peace and in that divine moment time will freeze” deal with ideas of afterlife. The delivery is great when it’s being sung solo, although the saccharine ‘Knockin’ on heaven’s door-esque’ backing vocals detract a little. Elsewhere, on ‘One more chance’ the singer encapsulates the insecurities of the artist, imagining how his wife will grow sick of his lack of income and leave him for someone wealthy. There is a world-weary tone that adds a real pathos to proceedings. Meanwhile, ‘Lily Like a Gunslinger’ effectively serves as a murder ballad for the #MeToo era. The genre’s norms are subverted as the female perpetrator takes revenge against her abusive husband. The line, “Now she’s stood there above him, saying wake up my friend. Please mister come back to life, so I can kill you again” brutally foregrounds how he is thoroughly deserving of his fate.

This is definitely a good album and Thomas portrays the inner turmoil of a songwriter’s mind very effectively. The best tracks are the introspective ones and, while the anguish of the faster tracks is appealing, one can’t help thinking he’s holding back a little on them vocally. If he cuts loose and really howls a little more on his next album then it might just end up being a classic…

State of the union- style address by acclaimed Swedish troubadour