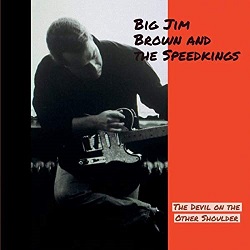 The Speedkings are whomever Jim Brown is playing with, so this latest release doesn’t have much of a common line-up with 2016’s ‘After All, it’s Been Forever‘ and on any given night his live band is likely to be different again. On his latest release Jim Brown has taken more of a hand in the writing of the material – so there are none of The Band or John Hiatt covers that appeared on the earlier release. The nine songs that make up the album are pretty evenly divided between full band and mostly acoustic numbers, but all with Jim Brown’s deep baritone and an accomplished touch on the lyrics of this rootsy Americana release.

The opening title track is one of those band numbers, which has a swaggering bad-ass justifying himself as not as rough as he’s been painted. There’s a nice trick with the lead electric guitar, it’s been set well back from the main band, sounding almost to be coming in from another room – but not in a bad way, it’s a real hook when it lets rip and the volume is cranked up. The same effect is used on the slow and unsettling ‘Sunset Blvd‘, which uses a funereal pace to pick up on themes of youthful anxiety and protest. “You make it look so easy” intones Big Jim, before adding “to have it all so hard / Rebellion finds its way / Sunset Boulevard“. When he turns to the acoustic tracks he generally finds himself reflecting on love, and long-term relationships. ‘Pretty Girl‘ is an affecting take on meeting the perfect person to grow old with – and then going on to do that very thing “a silent kiss a single word / was the sweetest sound I’d hear / Once there was a girl with style / let me walk her down the aisle / happy times and then some blue / but I’ll spend them all with you“. It sounds like something worth trying. There’s a similar feel to the pacey ‘Real Live Girl‘ which takes a wry look at the complications of love – the arguments, the break-ups, the making up. And repeat, captured in the words  “I’m child like and over-rated and all my friends say I’m complicated / there’s no doubt that you’re a real live girl / What am I going to do with my love now? / I guess I’ll take a bow and exit off the stage but I’ll come back in a rage / and I don’t feel like I can go / at least until I know whether or not it all works out between me and you.” The urgency of the music and the earnestness of Jim Brown’s vocal captures a real tension between adoration and exasperation.

Throw in songs of death – ‘Richard‘ – and careless treatment of others and speed as a distraction – ‘Rumble Below‘ – and ‘Devil on the Other Shoulder‘ shows itself to be an album with a rich blend of themes, with light and shade in about equal measure. Somewhat like life.

An album of rootsy Americana that more than ticks the boxes, with several songs that just beg to be listened to again, and again. And once more.

About Jonathan Aird 1340 Articles
Sure, I could climb high in a tree, or go to Skye on my holiday. I could be happy. All I really want is the excitement of first hearing The Byrds, the amazement of decades of Dylan's music, or the thrill of seeing a band like The Long Ryders live. That's not much to ask, is it?