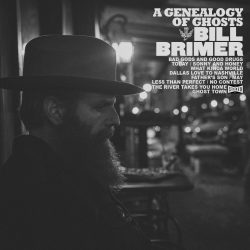 ‘A Genealogy of Ghosts’ is the debut solo album from Bill Brimer. In early 2018 he challenged himself as a songwriter to release an original song a month, which resulted in a significant musical canon to support a regular touring schedule of “bars, coffee shops, festivals, conferences, weddings, funerals and churches”. Covid-19 inevitably put a stop to that, but it has lead to him recording the songs for this release.

His written style belongs firmly in the country folk tradition and focusses on the stories of complex and damaged characters. As a concept album, it “explores the tragedies and triumphs we inherit and pass on from generation to generation”. The observational social writing is well framed by effective song structures in which few notes ever seem out of place. His vocals are strong with a decent country twang and the supporting cast of harmonica, pedal steel and fiddle combine to make this set of songs comfortingly familiar.

There is a more than a light dusting of melancholy throughout the record which opens with ‘Bad Gods and Good Drugs’ exploring the effect of three generations of addiction. This is followed by ‘Today’ which examines fatalism “I’m just trying to get through today and try to find some joy along the way”. ‘Sonny and Honey’ incorporates classic elements of southern rock while contemplating the effect of alcoholism on marriage and familial relationships. ‘Dallas Love to Nashville’ explores the legacy of country music: “Hank ain’t on the radio, but the train still plays his song” and ‘The River Takes You Home’ looks for peace upon the death of a loved one: “I’ve got ghosts following me…”

Overall it has a strong sense of place – the combination of vocal and musical style, lyrical references to whiskey, religion and doing time in the pen puts you firmly in the southern US. Music that is rooted in a place brings with it a capacity to relocate the listener and this album achieves this with ease. It is evident that Bill is a working musician that gains real pleasure from writing and singing and it would be great to see these songs performed live in a bar somewhere in Texas. This record may not contain a lot of surprises but it is undoubtedly genuine, which is a term casually used and less commonly justified.