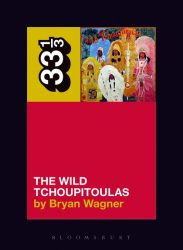 There will be many who have never heard of ‘The Wild Tchoupitoulas’ but this was a seminal record in establishing an earthy, roots-based aspect of New Orleans music – as such it’s of major interest to anyone who seeks knowledge of some of the more obscure aspects of Americana. This book, from American academic, Bryan Wagner, examines the background to this recording, providing historical and social context to a landmark album.

‘The Wild Tchoupitoulas’ is a fascinating record. Released in 1976 it features the Neville Brothers, together on record for the first time, along with members of the legendary Meters and produced by that master of the New Orleans sound, Allen Toussaint. All under the direction of George Landry, aka Big Chief Jolly, Head of The Wild Tchoupitoulas Mardi Gras Indians Tribe. This is the definitive recording of Mardi Gras Indian chants and songs and it’s at the heart of the New Orleans sound that embraces the Nevillles and The Meters but also the likes of Doctor John, Lee Dorsey and New Orleans bands like The Radiators.

The Mardi Gras Indians are a strange phenomena that have to be seen, and heard, to be believed. Legend has it that when Louisiana was under French rule, the region suffered a bad year for crops, with little food available. The land owners gave their slaves the “freedom” to find food where they could. Many slaves were taken in by Indian tribes, who helped them to survive. As a tribute to those Indians, the tradition of parading dressed as Indians (at Mardi Gras) grew in the New Orleans black communities.

It’s a good story, whether it’s true or not; the music is reckoned to go back to the 1880s and the foundation of Creole Wild West, believed to be the first “Tribe” in the city and it has given rise to some amazing performances from the various Tribes over the years, based on some Native American chants and the old slave field hollers and early blues; some of the carnival performances will go on for hours on end. “The Wild Tchoupitoulas” represents the first true recording of a sound that had been around for almost 100 years without ever being properly documented.

Bryan Wagner’s truly enjoyable book is a fascinating trip into some of the history of the amazing city of New Orleans and the past and traditions of a section of the population who don’t always get the attention they deserve. It is much more about tradition and history than it is about the album per se; and it’s an all the better read as a result of that. In the course of this book he delves into the culture that brought this phenomena about, looks at the family links that many of the Tribes enjoy and the importance of the wider Neville family (the Neville Brothers being George Landry’s nephews) in the growth of the Mardi Gras Indian movement.

He also looks at the contentious issues of appropriation and authenticity that inevitably come into play when discussing this music. Given that the black community have seen their music and culture appropriated so much up to this point it may have come as a surprise to suddenly find themselves receiving those same accusations but there was anger from the Native American communities, who felt their image, music and dancing was being misrepresented and also some opposition from within the Mardi Gras Indian community who felt that these songs did not belong on a public recording.

The great thing about these 33 1/3 books is the amount of forensic detail they go into when analysing these recordings. It really is impressive.

To underline how important this album is, in 2012 the record was added to the U.S. Library of Congress’ National Registry, with a designation of “cultural, artistic and historic importance to the nation’s aural legacy”. That’s quite an impressive accolade to lay on a recording that really just set out to capture the sounds of a community, coming together in celebration of life. Stephen Erlewine, the prominent music critic and senior editor of the online database AllMusic ranked the album among New Orleans greats and said that the recording “locks into an extraordinary hybrid that marries several indigenous New Orleans musics, with swampy, dirty funk taking its place in the forefront”.

Bryan Wagner’s book does full justice to this album. If you’ve ever found yourself wondering what the phrase “Jockomo Fee Na Nae” actually means then you need to read this book – and I defy anyone to read it and then not start searching for a recording of “The Wild Tchoupitoulas”.