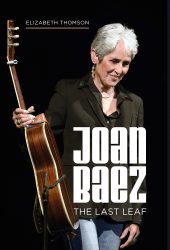 Joan Baez is one of those artists that, for most of us, has always been there. I’ve certainly always been aware of her presence, throughout my interest in popular music in general, and folk and roots music in particular, and that started well before my teens. The thing about this enduring presence is that, to quote another Joan, “You don’t know what you’ve got ‘til it’s gone”, and reading Elizabeth Thomson’s excellent new book on Joan Baez makes me realise that this is an important artist that many of us take for granted; she’s always been there so we expect that she always will – but this book has been written as a prelude to Baez’ 80th Birthday, which will arrive in January 2021 and, though she remains as vibrant and active as ever on many fronts, she announced her retirement from performing and recording at the end of her worldwide tour in July of 2019, almost exactly sixty years after making her debut at the Newport Folk Festival in 1959.

What we get with this book is something more than a standard biographical approach to documenting an artist’s career. All the career information you might want is there, along with a comprehensive discography, filmography and bibliography, but Thomson’s book is more insightful than just providing simple biographical data. This book offers us an opportunity to discover the person behind the legend. Yes, Joan Baez is an important musician, in many ways one of the most important of the 20th Century, but she has also been a key figure in the American Civil Rights movement and a tireless champion of human rights across the globe. Joan Baez was always more than just a folk singer.

All this becomes apparent through ‘Joan Baez: The Last Leaf’. Thomson, an established journalist, author and broadcaster who has edited books on Dylan, Bowie and Lennon in the past, has clearly researched her subject thoroughly. She has interviewed Joan Baez herself a number of times over a forty-year period and also draws on a variety of other interviews with long-time associates and friends, both from the world of music and from wider afield.

This book was originally commissioned as a large-format, fully illustrated book. The impact of the Corona Virus epidemic meant that ambition had to be scaled back a little if the book was to be ready ahead of Joan’s 80th birthday – but that has in no way diminished the quality of this book. The illustrations and photos that have made it into print embellish the book beautifully and it is a triumph, especially in these difficult times.

The two main things I took away from reading this book were, firstly, just how much of an impact Baez had when she first appeared on the scene back at the end of the 50s. Again, because she has been around for so long and because we’re so used to hearing her, the records she makes perhaps don’t stand out as they once did – not least because there are a lot more recording artists to contend with these days. What this book reminds us of, very successfully, is just how game-changing she was when she first started to perform. She came into a folk scene that was largely built around singers and small groups performing in the traditional style. This book sent me back to listen to some of Baez’ early recordings and her voice cuts through the air like a finely honed blade – that beautifully pitched soprano with crystal clear pronunciation rings like a bell and makes other recordings at the time sound muddied and indistinct. Robert Shelton, the New York Times music critic who wrote extensively on the 60s Folk Boom (and who would go on to write the classic Dylan biography, ‘Bob Dylan: No Direction Home’), said of her appearance at the inaugural Newport Folk Festival “A star was born at the first Newport Folk Festival in the person of Joan Baez, a young soprano with a thrilling, lush vibrato and fervid and well-controlled projection”. It’s exciting to read just how significant Baez was at this time. Some critics also make reference to her “exotic” appearance, an attractive young woman with striking features resulting from having an Anglo-Scottish mother and a Mexican father, and this certainly helped her to stand out from the crowd, but all are agreed that it’s the voice that grabs the attention above everything else and it is that voice that has served her well and kept her at the forefront of an unforgiving industry for so long. It’s also important to remember just how significant Baez was in assisting the early career of Bob Dylan. ‘The Last Leaf’ makes it very clear just how much of a platform Baez provided for Dylan when he was trying to establish himself. In inviting Dylan to perform at what were very much her concerts, Baez was providing him with access to an audience that he didn’t have at that time, often at some disadvantage to herself. The book paints a very clear picture of an artist who was both ambitious for herself but also happy to use her growing popularity to help others.

If the first “takeaway” from this book is very much about Joan Baez’ significance as a musician, the second major point the book made for me was the significance of Joan Baez as a champion of human rights. For many, Baez will be seen simply as a folk musician, a very significant one but not much more than that; and that would be to miss the whole focus of who Baez was/is and the full significance of her life and career. It becomes very clear, in ‘The Last Leaf’, that performance and political campaigning are completely co-dependent throughout Baez life. She was not a folk musician who came to be a civil rights champion; her belief in the importance of standing up for those less fortunate than herself was not something she came to because her life needed more meaning. Championing the rights of people is as important to Baez, from a very young age, as her need to express herself musically. This is a woman who was at the forefront of the Civil Rights movement in America in the 50s and 60s; who stood side by side with the great names of the movement, like Martin Luther King and Odetta Holmes. She was also there when the American people started protesting the Vietnam War, a visible presence on Anti War marches but equally critical of the Communist Forces in Vietnam and their treatment of their countrymen. She helped to found the American chapter of Amnesty International, she performed in Latin America when many countries were controlled by dictatorships and she received death threats for her support of downtrodden citizens, she has championed LGBT rights and supported environmental campaigns – the list of her human rights activities is impressive both in its length and its vision; so much so that, in 2008 Baez was honoured by the Americana Music Association with the Spirit of Americana/Free Speech Award. One of the many awards she has won for her campaigning work.

Elizabeth Thomson has said that her book on Joan Baez “endeavours to show how central a figure she is in post-war, socio-cultural history and how she used her gift to bring solace and hope to people who had little of either”. There is no question that she has achieved her aim and then some.

I don’t think it is an exaggeration to say that this is a book destined to become the definitive word on the life and times of Joan Baez; put it on your list of this year’s essential reads.