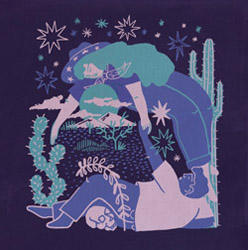 New York resident Jake Winstrom says his first solo album, 2018’s ‘Scared Away The Song’, suffered from too many “serious songwriter” type songs and not enough fun, uptempo, jangly rock ‘n’ roll. Rest assured, on the follow-up, ‘Circles’, the former frontman of Tennessee band Tenderhooks, hasn’t made the same mistake twice – recent single, ‘What’s The Over/Under?’ is a fantastic, irresistible power-pop tune, with 12-string guitar, soulful horn blasts and a killer chorus that could’ve been written by Fountains of Wayne, while on the chugging, glam rock boogie-meets-country of opener ‘Come To Texas She Said’, reedy-voiced Winstrom does his best Marc Bolan impression.

‘Think Too Hard’ has a ‘Revolver’-era Beatles vibe and also sounds like Detroit singer-songwriter Nick Piunti – a power-pop maestro – the jaunty ‘Loose Change’ – written about old relationships that didn’t work out – has some cool ‘60s organ on it, and for the brooding and epic album closer, ‘Kilimanjaro’, Winstrom and his band go full Neil Young and Crazy Horse – with a squall of electric guitars, it’s like a hurricane has blown into town.

‘My Hiding Place’ – a song about addiction – is also Young at heart. Its blistering guitar solo could’ve come off 1975’s ‘Zuma.’ There are more ‘70s classic rock influences at work on ‘Washed My Face in A Truck Stop Mirror’ – Winstrom says he had Tom Petty on his mind when he wrote it. The piano, brass and organ give it an E Street Band feel too.

When Winstrom does offer up some “serious songwriter” type songs, he doesn’t disappoint – the affecting ballad, ‘I Walk In Circles’, has shades of Elliott Smith and features some haunting, melancholy cello, and ‘The Crystal Ball’, written about a guy he saw late one night, standing in the middle of a crowded bar, swiping Tinder on his phone, has a loose, country rock groove, with some great pedal steel.

Talking about the album, Winstrom says: “Obviously the world needs another rock ‘n’ roll record like it needs a hole in its head right now. But I needed this one… I hope folks dig it. I do.”

He’s not the only one.