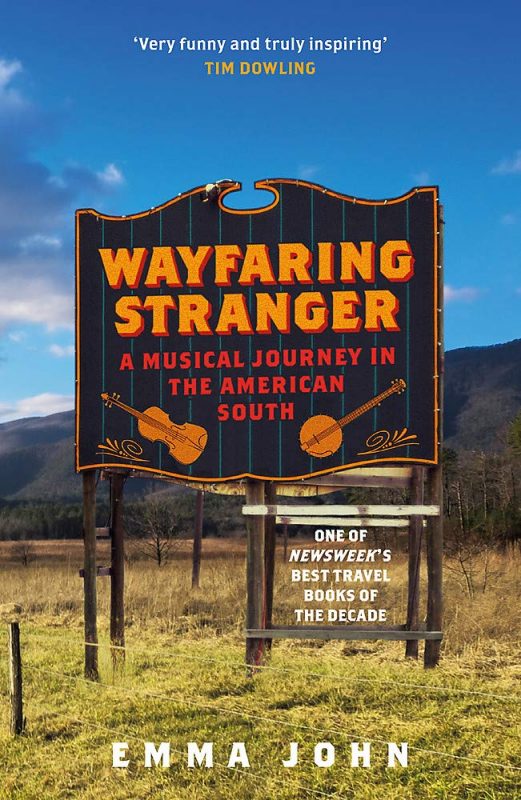 If you should decide to read this book be warned; you’re likely to spend a lot of your time, while reading it, smiling. You’ll frequently giggle and you will, occasionally, laugh out loud, all while nodding your head and making approving noises. Well, that’s what I did and I’d like to think I’m not entirely on my own in the way I react to good writing. Emma John is an award-winning British journalist and this is her second book, her first being ‘Following On: A Memoir of Teenage Obsession and Terrible Cricket’, which was named Wisden’s Book of The Year 2017. ‘Wayfaring Stranger’ is most definitely not about Cricket.

It would seem that Emma John’s gateway drug to a new and intoxicating world came from the unlikely source of Mumford and Sons. The sudden explosion of their debut album onto the airwaves all over the UK in 2008 meant that John, by her own admission a bit of a fashion graveyard when it came to popular music, was suddenly aware of a new sound that intrigued her. If you want to know exactly how she got from a passing interest in the banjo-driven folk/pop of the Mumfords’ ‘Sigh No More’ to entering bluegrass fiddle competitions in the Appalachian Mountains – well, you need to read this book.

It is a terrific story. John had trained as a classical violinist as a young girl but had fallen out of love with the music and with her instrument, but there’s something about bluegrass, and a style of playing that’s so at odds with the way she was taught to play, that captures her imagination. So, she travels to the Appalachian Mountains with a view to learning all she can about bluegrass fiddle playing and, hopefully, to find herself a place among the fiddle players that travel the many highways and byways that link the bluegrass festivals that abound throughout the region. Along the way we meet a whole host of fascinating characters, get a potted history of bluegrass (and how a lot of people spend a lot of time not talking to each other), get a page of great banjo jokes ( “the difference between a banjo and a harmonica. When you play the harmonica you only suck half of the time!”), learn about the warmth and hospitality of just about every person she meets along the way, and wonder at the dedication and focus of someone who is, as she readily admits, clearly way out of her comfort zone most of the time but willingly embraces every experience that comes her way.

Emma John is as unlikely a candidate for a bluegrass fiddle player as it’s possible to imagine. As the promotional information for the book says “Classically trained, highly strung and wedded to London life, Emma was about as country as a gin martini” and, of course, that’s part of the appeal of this book. ‘Wayfaring Stranger’ is a classic fish out of water storyline, but none the less enjoyable for that; think ‘A Year in Provence’ but with banjos and bourbon!

It is, primarily, a travel book in the light touch style of travel writing that has proved very successful for authors like Bill Bryson, but it is also a bit more than that. The real strength of this book lies in its several voyages of discovery and all are fascinating. There’s the musical discovery that playing can be genuinely enjoyed, that it’s not just for note-for-note recitals that have no emotional impact on the player; that you can find your way back to a passion for your instrument and what can be achieved with it. There’s the discovery that people are not always what they appear, something that we all feel we should know but which still often takes us by surprise. There’s the very relatable personal voyage of Emma John herself, as she discovers more about herself as an individual and lets the reader in on her own insecurities and doubts. Above all this, there’s the discovery of the soul of a musical genre and of the very different culture that exists around bluegrass; as John observes, “To play this music was to indulge a belief in a brighter past: a golden age when life was simpler, and more honest, and people really cared about their mammas. Here in the Southern heartland, bluegrass wasn’t what you did; it was who you were”.

This book is funny, entertaining and informative and that would be more than enough to recommend it but it will also resonate with AUK readers in a way that few other books will. I enjoyed this book because there was so much I could relate to and that will be true for anyone who is passionate about Americana music.