Welcome to another feature in the FORGOTTEN ARTISTS series, where we take a look at some of the Americana musicians that may just have dropped out of people’s memories or who, perhaps, never received the appreciation their contribution to the genre deserved. This time I’m taking a look at the career of singer/songwriter Hal Ketchum.

Hal Ketchum had a string of hits on the Billboard Country Charts in the 90s. In fact, between 1991 and 2006 he clocked up no less than 17 hits and, while none of them made the top spot, three of them hit second place. Sadly, this excellent songwriter and performer has been dogged by ill health and bad luck. In 1998, not long after he’d successfully kicked a drug and alcohol dependency that had hung over him for the best part of two decades, he was diagnosed with acute transverse myelitis, a rare spinal condition related to Multiple Sclerosis, which left him temporarily paralysed on the left side of his body. He had to learn to walk again and he had to adapt considerably to be able to continue to play the guitar. Against all the odds he continued to perform and record for a further twenty years – but in April of 2019 his wife announced his retirement from music; early onset senile dementia, including Alzheimer’s, had finally put a stop to a fine career carved from adversity.

Ketchum was born in Greenwich, New York, near the Vermont border, in 1953. It was exactly the sort of small-town he would later sing about on his breakthrough hit ‘Small Town Saturday Night’; Ketchum would become a good songwriter who drew his inspiration from the life around him.  He started his musical career as a drummer with an R&B trio at the age of 15, working small clubs on his local circuit. He also established himself as a successful carpenter and cabinet maker while he continued to play in the various local bars and clubs. Eventually realising that he needed to get out into the wider world he relocated to Austin, Texas, in the early 80s and started to write his own songs, inspired by the many local singer/songwriters on the Austin scene. Although identified as a country artist, Ketchum’s writing style draws a lot more from the American folk tradition than country music, with his simple songs of relationships and the human condition packaged in easy to listen to melodies.

He recorded his first album, ‘Threadbare Alibis’, in 1986, after some time spent opening shows for Jerry Jeff Walker and in 1987 songwriter Pat Alger introduced him to producer Jim Rooney, who encouraged Ketchum to move to Nashville. He signed with local Nashville label Curb Records, who he would remain with for all but his final recording in 2014, and with Jim Rooney and Allen Reynolds producing, he put out his second album and achieved his first, and only, gold record; at the age of 38 Ketchum had finally broken through to the big time. ‘Past The Point of Rescue’ (1991) remains Ketchum’s most successful album, though his first four album releases on Curb all performed well in the country charts. Two of his top three hits would come from this album, the title track and ‘Small Town Saturday Night’, with his next album, ‘Sure Love’ also producing two top three country singles (‘Sure Love’ and ‘Hearts are Gonna Roll’). Ironically, the hit that Ketchum is most associated with, ‘Past The Point of Rescue’, wasn’t a Ketchum composition but that of Irish songwriter and folksinger Mick Hanly and only came to Hal through Irish guitarist Philip Donnelly. Donnelly, who was working with John Prine at the time, was a friend of Hanly and of Nashville music publisher Terrell Tye, who was a partner in Forerunner Music with….Jim Rooney and Allen Reynolds. Donnelly passed the song to Tye, (who would later become Ketchum’s second wife). A convoluted process that shows how serendipitous the music business can be at times. Though the song had been a hit in Ireland for Mary Black, it only grabbed wider attention once Ketchum released it. 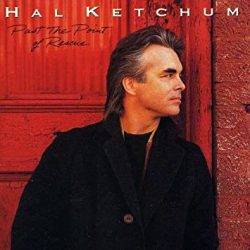 Though the ‘Past The Point of Rescue’ album was his only recording to reach Gold Record status he would continue to sell well throughout the ‘90s and into the early 2000s and he was inducted into the Grand Ole Opry in 1994, a sure sign of his success; but his last album to chart was 2001’s ‘Lucky Man’ and it only reached a disappointing 72 in the Country Hot 100. His last single success was the 2006 release ‘Just This Side of Heaven (Hal–lelujah)’, which just managed to sneak into the Country Top 50. It came from the album ‘One More Midnight’ but the album was never released in the U.S, being released in the UK only in 2007, though it failed to make any real impression. There was one more Curb album, 2008’s ‘Father Time’, an album of original songs (with the exception of a cover of Tom Waits’ ‘Jersey Girl’) that was enthusiastically received by the critics but sales didn’t reflect the critics’ enthusiasm. Worn out from trying to maintain his music career in the presence of a debilitating illness, Ketchum called it a day, packed away his guitars and left Nashville for Texas, where, by his own admission, he became a recluse. “I was hiding out. I’d been in the public for so long. I didn’t even go into town; I had my daughter bring me groceries. I developed a form of agoraphobia, really. I found pleasure in watching the stars at night and watching the sun during the afternoon. I also put out a lot of bird feeders and basically talked to myself all day long.”

But Ketchum wasn’t done yet. His years of “retirement” would actually bring him back to his songwriting, starting by writing down his day to day observations of the world around him and finally realising that he still had songs to write. In 2014 he went back into the studio to record what will now prove to be his final studio album, ‘I’m the Troubadour’. Released on Austin independent label, Music Road Records, the album revitalised the jaded Ketchum who finally felt he could record and perform on his own terms. He’d never seen himself as a country artist, that was the way Nashville viewed him, and this album was a return to his wider influences from folk, rock and blues. The album was well received and Ketchum returned to live performances but on a level that he felt he could deal with, playing smaller, more intimate venues where he felt he could better connect with his audiences. Ketchum had always seen himself as a modern-day troubadour, rather than a Nashville country star, and this was clearly a form of music-making that was much closer to his heart. Sadly, his health continued to prove a problem and the relatively early onset of dementia means that this fine musician has now had to ring down the curtain and end what was looking like a promising return to live performance.

I’ve always enjoyed Ketchum’s music – take a listen to these tracks, two from his breakthrough album and the title track from his final recording. Separated by some twenty-three years, you’ll hear a musician who always believed in his music and the songs he had to share.