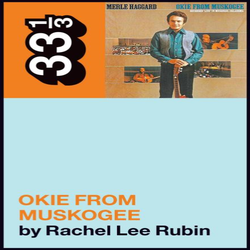 First things first. If you haven’t discovered the excellent 33 1/3 series of books from Bloomsbury Publishing you’re seriously missing out. This is a series of short books about popular music and it focuses on individual albums by a very wide range of artists. Obviously not all of these will be of interest to Americana fans but there is enough to make this a series well worth investigating.

The books take the form of an extended essay and are often quite academic in their approach but they are still very readable and give some real insight into some important albums. If you like your musical history and really enjoy getting under the skin of an artist and their music then this is a series you will want to check out.

‘Okie From Muskogee’ is an album that will be familiar to many Americana fans. It was Haggard’s first live recording, recorded at the Muskogee Civic Centre in October 1969, the day before the single of the same name entered the country charts, and released as an album just two months later. The title track has gone on to be regarded as something of a redneck anthem but that’s far too simplistic a view, as Rachel Lee Rubin’s book makes clear. Haggard himself explained that he wrote the song for his father, trying to put into words how his father and his father’s generation would view some of the changes taking place in society at that time. He has also described the song as satirical and voicing opinions opposite to those he himself held.

What Rachel Lee Rubin’s book does is to widen the context of how the recording would have been viewed at the time and give some interesting background on the sociological factors that contributed to the popularity of the ‘Okie From Muskogee’ album. It’s worth noting that this album was a considerable hit at a time when there was very little crossover from country music to the general market. ‘Okie’ (the album) topped the Country Music charts and also made number 46 on the Billboard Pop Charts. It gave Haggard an Academy of Country Music award for Album of the Year and in the CMA Awards he picked up Album of the Year, Single of the Year (for the title track) and Top Male Vocalist.

Haggard, along with Buck Owens, was a pioneer of the Bakersfield sound and it’s this aspect of his work that is particularly interesting in the book and the link between this album and the Bakersfield sound is a fascinating one. What a lot of people may not appreciate is that Bakersfield, California is every bit as important to Country and Americana music as Nashville, Tennessee. Without the country sound developed and nurtured in Bakersfield there’d have been no Creedence Clearwater Revival, no Flying Burrito Brothers, no Eagles etc. Bakersfield is as important to American music as better known locations such as Nashville, Austin, Memphis, Clarksdale and so on. And key to the sound of Bakersfield are the Okies from Muskogee and others like them from the State of Oklahoma. Bakersfield has always been a big agricultural hub and, more latterly, a centre of oil production. As a result it has long been a focus for migrant workers and it’s these workers, drawn from throughout the southern states but particularly from Oklahoma, hard hit by the Dust Bowl depression of the 1930s that saw many agricultural workers migrate west in search of work, that laid the foundations of the country music scene in this corner of California.

This is a richly layered book, as you might expect from a Professor of American Studies and one of the leading commentators on popular culture in the US, but it is always accessible in its style and a real pleasure to read. It draws from a wide range of research sources and those sources are clearly identified and referenced – so this is a book you can read for its single subject matter or which you can use as a jumping off point for a more extended look at Haggard and the Bakersfield sound. This book is about region and class and the impact that can have on music – about how regional pride can influence culture; something we saw a lot of in the UK in the 60’s and 70’s. In short, it’s a fascinating look at a landmark recording in American music history. Highly recommended.

An academic but highly entertaining read