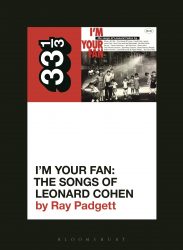 If it wasn’t for the ‘I’m Your Fan’ album, and John Cale’s choice of ‘Hallelujah’ for his track, we may never have had Jeff Buckley’s sublime version of that song; or the flood of covers that followed it. Something of a mixed blessing? The thing I particularly like about reading books, on the subject of recorded music, is finding those little facts that you didn’t know but which bring everything into sharp focus once you do know them. I could never see how Jeff Buckley got to his version of ‘Hallelujah’ from the Leonard Cohen original; once you learn that he hadn’t heard Leonard Cohen’s original version until after he recorded his version, it all makes perfect sense! And it’s all here in Ray Padgett’s excellent book about the 1991 tribute album ‘I’m Your Fan: The Songs of Leonard Cohen’, recently released in Bloomsbury Academic’s 33 1/3 series.

For anyone who regularly reads my book reviews, and I do hope there’s someone out there, you’ll know that I’ve reviewed a few books in this series and they’re always a fascinating read. This book is certainly a fascinating read but it deviates from the usual pattern in that it’s not written by an academic. In the past, the 33 1/3 books I’ve reviewed have come from professors of Social History or Linguistics or other figures in the academic world who bring their particular branch of learning to bear on an album of their choice. Ray Padgett may well be swimming in academic qualifications for all I know, but he approaches his subject matter as a music fan and a writer of the largest blog devoted to cover songs on the web. Padgett is the creator of Cover Me, the blog in question, as well as the author of the 2017 book ‘Cover Me: The Stories Behind The Greatest Cover Songs of All Time’. He’s also a regular contributor to MOJO and The New Yorker, among other publications.

We still get the same style of forensic examination of the album under discussion but it’s a much more emotional connection than academic analysis usually brings and, in this case, the book is all the better for it. This could’ve been quite a dry read given its subject matter, but it turns out to be engaging and interesting in equal parts and much of that is down to the obvious enthusiasm for the subject matter from the author.

As well as a breakdown of this album, and what it took to bring all the constituent parts together, we get a potted history of the Tribute Album and its rise from a derided source of cheap music to its current prominence in the music world and the value it brings to the careers of both the covered artist and the acts doing the covering. A tribute album is now considered a rite of passage for most established acts and the interest shown in our own series, on Classic Americana Compilations, show that a good cover song is always popular with music fans.

What we have here is, quite simply, a great story very well told. It’s the tale of how a French music magazine, ‘Les Inrockuptibles’ (love that name!) almost single-handedly saved the career of a singer songwriter who’s popularity had dived to such depths that his record company had even refused to release his 1984 album ‘Various Positions’ (the one that includes the original version of ‘Hallelujah’) in the U.S.A. Along the way, they assemble a cast of bands for a tribute album that include artists who went on to be major names in the industry, such as R.E.M and Nick Cave and the Bad Seeds, and artists that have faded away with time. The tracks they chose to contribute, the many different reasons why they chose them and how this album helped to bring Leonard Cohen’s music to a new audience are all factors that contribute to the overall appeal of a very enjoyable book indeed. If you read Ray Padgett’s book, and you really should, I guarantee that, if you have the album he’s writing about, you’ll be digging it out to listen with fresh ears. If you don’t have it, you’ll be hitting the internet to check out the album and the covers therein. First stop – John Cage’s ‘Hallelujah’. Both the album, and this book, are a fitting tribute to a great songwriter.