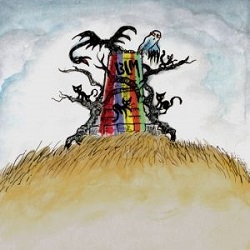 A second album in the same year from the Drive-By Truckers, and it’s a punchy pacey affair. It’s an album that started life as an EP, a quick follow up to ‘The Unravelling‘ which fleshed out some songs leftover from that album and filled a Covid shaped space in the Drive-By Truckers’ lives. And then, as the Summer unfolded, it grew some as a reaction to what has become an astonishing year. The opener and title song starts out as a raucous and rumblin’ rock put down of a woman
who is just too much trouble “she’s a laugh a minute from a joke so cruel” which it soon becomes apparent is really about the State of the Nation. In the same way as that bad girlfriend can change your outlook to accommodate staying with her so the changes of the last four years could be accepted as just the way it is – “the new ok“.  It can be different – if that’s what people want, as Patterson Hood queries “will we rise up from where we’re planted with our fists raised up to the sun ? Or will we settle for tear-gassed eyes staring down the gun?“

‘The Unravelling‘ is punk-southern rock, which boldly declares that change is coming – “the unravelling is happening” – as it powers through the falling apart of one who once had it all and then finds it was all so ephemeral, and that all those toes that got trodden on don’t make for loyal friends “No matter how you break it down / Your friends all scatter when the shit comes down.” There’s more punk – the Seventies kind – when the Drive-By Truckers’ bassist, Matt Patton, takes the vocals for the album’s closing song, a cover of the Ramones’ ‘The KKK Took My Baby Away‘.  This both captures the punk-garage of the original and, in this company, becomes a timely critique of the continuing presence, and continued support from some quarters, of that organisation.

It’s not all punk energy on this album.  There’s a nostalgic feel to ‘Sarah’s Flame‘, which by rights should be a heartbroken love song whereas it walks in the shoes of a young woman who finds a place in the world by stoking racism and finding little ways to help the hate along its path “The tikis would’ve never hit the streets if it weren’t for Sarah’s flame.”  There’s a similar flip of expectations on ‘Watching the Orange Clouds‘ which has a deceptive acoustic laid-back feel.  Those distant clouds, though, are tear gas and there’s a protest going on.  As Patterson Hood sings of not wanting to wake his kids he’s looking out over a world of chaos which tells him that they will need  “some awakening, from the privilege of skin and the seat at the table that’s awaiting them / Across the Burnside Bridge there’s heads getting bashed and teargas / Boys too stupid to really be proud.”  It’s a poignant moment of reflection.

Drive-By Truckers have always been a political band, perhaps it wasn’t always so overt – although ‘The Southern Thing / The Three Great Alabama Icons / Wallace‘ from ‘Southern Rock Opera‘ would argue against that. If ‘The Unravelling‘ eloquently dwelt on the issues of the upcoming election – drug problems, racism, gun control and the lack of it, inhuman treatment of children of immigrants – then ‘The New OK‘ revisits the same with a more directly emotional appeal.  It’s an appeal to better selves: the Drive-By Truckers are asking a basic question of their fellow citizens: “is this really the country we want to be and are we willing to fix this?” It’s no accident that it’s a question posed a month before the Presidential election.