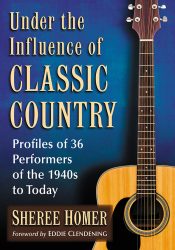 Anyone interested in the history of country music, and its wider influence on this music we call Americana, would do well to check out Sheree Homer’s excellent new book “Under the Influence of Classic Country”. Subtitled “Profiles of 36 Performers of the 1940s to Today” the author has taken a close look at some of the great artists of the Classic Country era (1940s to early 1970s) as well as acknowledging the revivalists currently keeping this music alive. Drawing on extensive original interviews with some of the artists themselves, their family members, friends and associates, as well as the use of well-researched archive material, it’s an affectionate look at some of the finest musicians from this genre, along with snapshots of their lives on the road and in the studios. Effectively these are mini-biographies; as the title says, “profiles” of significant and influential artists.

Where this book gets clever is in the way it groups these artists. We have seven different chapters and each one groups between three and eight artists under a chapter heading – Country & Rockabilly Groundbreakers, Storytelling Songwriters, Countrypolitan Hit Makers, Seventies Stars, Harmonious Duos and Groups, Country Revivalists and Rockabilly Sensations.

The more astute among you will notice that Rockabilly gets two bites of the cherry here and that’s not surprising since the author originally ran her own music magazine, ‘Rockabilly Revue’ and has written other books on both the music and musicians associated with it, including a biography of Ricky Nelson, one of the pioneers of Rock and Roll and someone who drew heavily on Rockabilly influences. The book is well written throughout but the rockabilly sections really shine and Sheree Homer’s enthusiasm for this music rings out loud and clear.

I particularly liked the fact that the author hasn’t just concentrated on the big names of Classic Country; yes, the likes of Loretta Lynn, Kenny Rogers and Waylon Jennings are featured but so are great artists like Lefty Frizzell, Jerry Reed, Freddie Hart and a whole host more – artists who have been equally influential but who don’t have the same high profile in the music industry. Someone like Jerry Reed, who many would know more for his appearances as an actor, alongside Burt Reynolds in the Smokie & The Bandit films, is one of the great Country guitar players and wrote the Elvis Presley hit “Guitar Man”. He’s a perfect example of a truly influential artist who so often gets glossed over when we get into the history of the music; here he’s given a proper assessment of his work and his value to the industry.

The book also does a good job of acknowledging the modern artists who have brought Classic Country back into the spotlight and we get profiles of artists like BR5-49, The Derailers, Pokey LaFarge and The Secret Sisters, among others. This is the real strength of the book in that it doesn’t just talk about the influence of Classic Country on today’s artists but provides solid examples of that influence and how we’re seeing a revival of a back to basics approach to the music. This is a book that reminds us that Classic Country is not the string-drenched, over-sentimental, smooth “Country” of the Nashville Sound, as presided over by Chet Atkins when he was Manager and Head Producer at RCA Victor, but a music rooted in real instruments, the traditions and the lives of country folk in the Southern States of America. This book encourages you to seek out the artists mentioned and really listen to their music again, and it’s a welcome reminder of how good original country music can be and how relevant it is to much of today’s Americana.

1 thought on “Book Review – Sheree Homer “Under The Influence of Classic Country” (McFarland, 2019)”