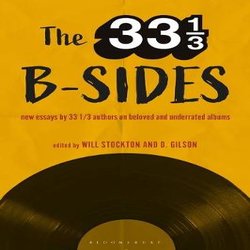 This is a lot of reading for the money! I’ve reviewed a number of books from this series over the past few months; usually a 33 1/3 book consists of an in-depth assessment of a key recording in an artist’s collected discography by an academic writer, usually someone who can bring a broader historical and/or sociological perspective to a specific album.

This new book ‘The 33 1/3 B-sides’ is an interesting departure from the usual model; the editors, Will Stockton and D. Gilson, have gone back to many of the original writers and asked them what albums they might focus on the second time around. So this book consists of a series of compact essays from previous 33 1/3 authors on albums that fascinate them but which they didn’t write about first time round – perhaps they thought they were too obscure, perhaps underrated at the time; a buried treasure – albums that had a big influence on their own listening and the development of their musical tastes.

As a result we get over 50 essays/reviews of albums by artists as diverse as The Durutti Column, Jane’s Addiciton, The Silver Jews, Christina Aguilera, The Village People and many, many more! Obviously there’s a lot here that will be of little interest to the hardcore Americana fan – though it’s always valuable to get an insight into the way different artists in different genres operate – but there’s plenty that falls into the wider Americana sphere and it all makes for some fascinating reading.

Among the essays that attract attention are ones on The Band’s ‘Rock of Ages’, Springsteen’s ‘Live at the Geneva Theatre (1974)’, Del Amitri’s ‘Waking Hours’, Silver Jews ‘Bright Flight’, along with albums from Bert Jansch, REM, Bob Dylan, Hank Thompson – the list goes on. The writing is always good and often passionate, the impact of the album on the writer clearly coming across; Steve Matteo writing about The Band’s ‘Rock of Ages’ – “ The sheer power of this dazzling five-piece group playing on stage at a concert hall with eleven years of being on the road behind them, backed by a five piece horn section, was a revelation. The blend of rock, R&B, country and jazz made for a truly unique sound and the vocal interplay of Levon Helm, Richard Manuel and Rick Danko made them distinctive”. Peter Astor chooses an alphabetical approach, an abecedarium, to address Bob Dylan’s ‘Love and Theft’ and concludes with “Z is for Zimmerman. Around 1959 a young Bob made the move to become “Dylan”. In so doing, he was looking to the future, putting on the style, inventing himself, and stepping into show business. Love and Theft is the embodiment of that.”

And a lovely paragraph from Sam Inglis, writing about Shirley and Dolly Collins’ ‘Anthems in Eden’, that probably sums up the way many of us have felt but would struggle to express – “Hearing a great album for the first time is exciting. Hearing a great album for the hundredth time is fulfilling. But the magic listening experiences are the ones in-between, the ones that happen on the way to loving an album.”

There’s lots of love on display in this collection of writings, along with many other emotions. This is a book to keep beside a favourite chair and to dip in and out of when the mood takes you. An opportunity to read another’s thoughts on an album you love – or get someone else’s take on an album that made little or no impression when you heard it. There’s also the chance that some of these writings might make you check out an album that’s outside your usual sphere of listening.

The broad range of music being critiqued means this book may or may not have particularly wide appeal but it is a lot of fun for those that can take it at face value – all music fans know there are a lot of good B-Sides out there!

One for the broad minded music fan