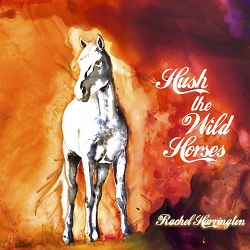 It has been fully seven years since Rachel Harrington’s last album ‘Celilo Falls‘, and those intervening years have been eventful for her to say the least. After the touring to support ‘Celilo Falls‘ Rachel Harrington was exhausted – and she’d also taken up drinking again after nine dry years. Obamacare helped with medical issues, but it’s been a longer struggle to finally give up alcohol again. In this same period Rachel’s grandmother died, and whilst staying with her there was something of a contemplation of other family deaths – all of which feeds through into the album.

The many setbacks and hard turns of fate that Rachel Harrington has experienced, though, helped shape the songs that make up ‘Hush the Wild Horses‘ – being the grit to work against on an album that has more than a few autobiographical elements, or drawing on painful family history. There’s death and addiction, there’s love and betrayal, and there’s war – all recounted with a uniform matter of factness that lay out the pain, and occasional joy, plain to hear.

The opener and title track establishes the musical direction, with aching vocals over a strident acoustic guitar and Eamon McLoughlin’s country fiddle. It’s a reflection on the healing power of love that has come into Harrington’s life “and you laid down in my bed and you hushed the wild horses…in my head“. In some ways it would make a perfect album closer, a statement that she got through all this and love came into her life – however it’s prime position at least serves to reassure the listener that Rachel Harrington’s pretty ok right now despite what’s to come on the following songs.

And we’re deep into the darkness on ‘Child of God‘, a stark banjo, fiddle and hand claps combination giving a jarring accompaniment to what at first sounds like a song of young lovers “out in the back of my house laid down on the ground / he took a hold of my hand did not make a sound / he pressed a finger tip up against my lip / he said it would not hurt started with a kiss“. There’s a disturbing reveal to come though: “just a girl of eight years old / didn’t know what to do / … / am I just your little plaything / am I just your little doll?” It’s this revelation that serves to explain the mournful ‘I Meant To Go To Memphis‘ where Rachel Harrington tells of the various self medications she has tripped herself up with over the years – “I meant to go to Memphis / but first I found cocaine“. It’s a tale of self-harm that eschews self-pity, and is all the more moving for it. Addiction comes up again on ‘Save Yourself‘ a song about Harrington’s meth-addicted homeless brother, a litany of bad moves and downwards spiral with the despairing “I can’t save you now / I did everything that I know how /…/ Maybe you’ll save yourself, someday”

Amongst the album’s war stories ‘The Barn‘ is the story of Harrington’s mother’s high school sweetheart who volunteered for Vietnam, and didn’t return. Over just the simplest of acoustic guitar accompaniment Harrington recounts what never got to be, a litany of lost opportunities “it was a hot day in July when the ‘phone rang / she don’t remember now exactly what was said / all she heard was the voice inside her head / there’d be no wedding day no big advances / no wedding ring no Mrs no baby swing / no flowers all in bloom no bride’s bouquet no solider groom“.  And then contrast this with ‘Mekong Delta‘ which over sprightly finger-picking recounts the mixed emotions of a war survivor, drawing on the experiences of Harrington’s Uncle who committed suicide after the war. It’s the truly felt emotion of these songs which distinguishes them from Mainstream Country’s shallow and empty by the book songs of Vietnam Vets.

If ‘Hush the Wild Horses‘ is a hard listen in places, it’s certainly also a big step forward in Rachel Harrington’s songwriting. Although the playing is uniformly good, and the backing vocals from the likes of Laura Veirs and Shelley Short are just perfectly matched, there is a simplicity to the album – no fancy additions and decorations, nothing to get in the way of the story telling. And that’s all to the good as well. Rachel Harrington’s had a tough last seven years, but she’s pulled a fine collection of songs out of it.